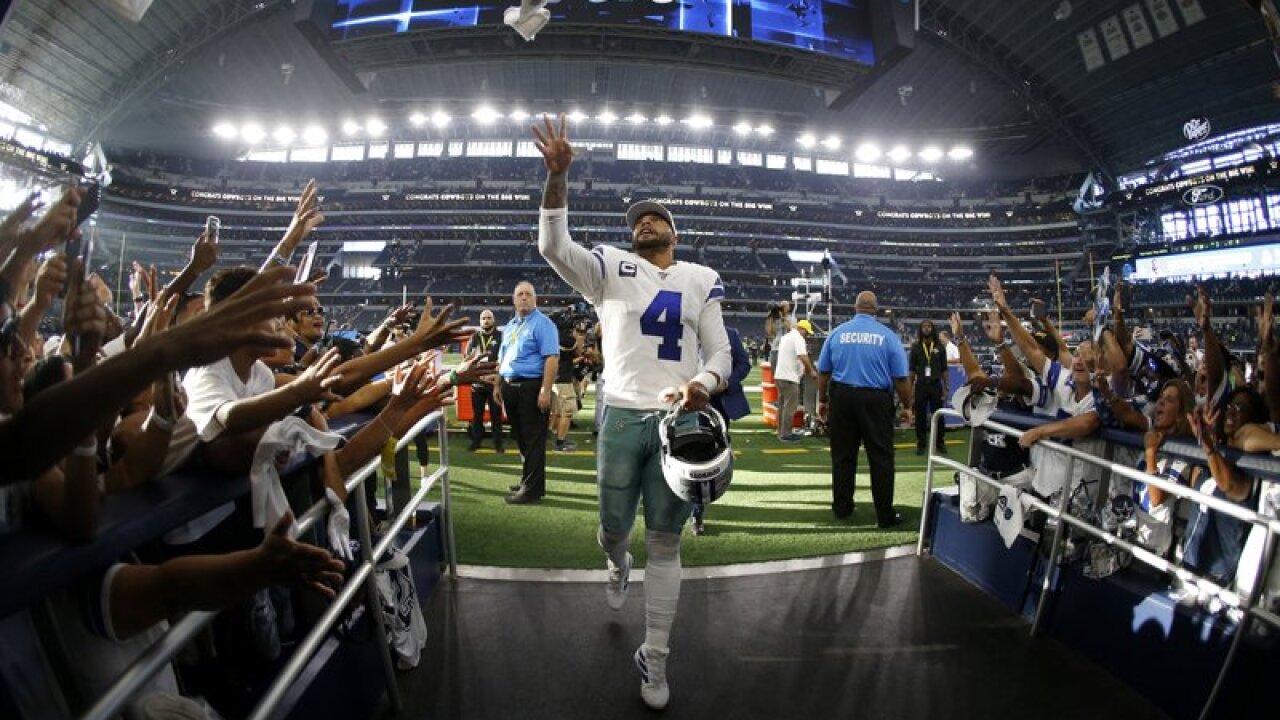 Dallas Cowboys&#39; Dak Prescott (4) tosses a item to fans as he walks into the team tunnel after their NFL football game against the New York Giants in Arlington, Texas, Sunday, Sept. 8, 2019. The Cowboys won 35-17. (AP Photo/Ron Jenkins)

DALLAS, TX — The Dallas Cowboys are set to take on the Washington Redskins in their first away game of the season on Sunday at 12 p.m.

The Cowboys are holding an "Official Watch Party" to celebrate the first away game of the season and as a kick-off to Hispanic Heritage Month and Mexican Independence Day, which is on Sept. 16.

The Official Dallas Cowboys Watch Party is presented by AT&T and being held Sunday, Sept. 15 at The Star in Frisco.

Cowboys fans will see autographs by Dallas Cowboys Cheerleaders and Cowboys Alumni, plus enjoy a live DJ, live Cowboys Pregame show at 11 a.m. and broadcast of the game outside on a 2,270 square-foot video board at 12 p.m.

"Fans can enjoy a festive game day atmosphere on Tostitos Championship Plaza and throughout the streets of The Star District," according to the Dallas Cowboys website.

#CowboysNation 🗣 Join us TODAY for the Official #DallasCowboys Watch Party presented by @ATT at @thestarinfrisco❕
Watch #DALvsWAS, autographs by @DCCheerleaders and Cowboys Alumni, a live DJ + more. Admission and parking are FREE.

#CowboysNation 🗣 @JourdanJD wants YOU at the Official #DallasCowboys Watch Party presented by @ATT TODAY at @thestarinfrisco to cheer on the team! #DALvsWAS

Are you ready for some football!?!