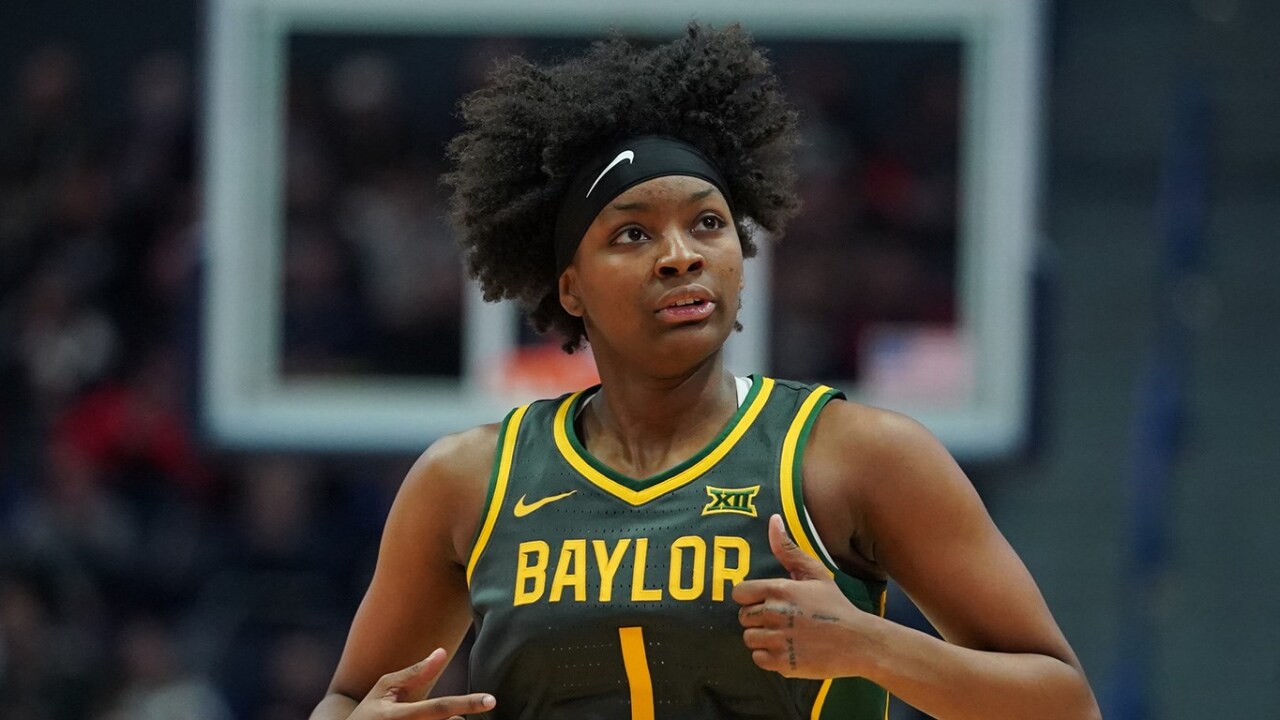 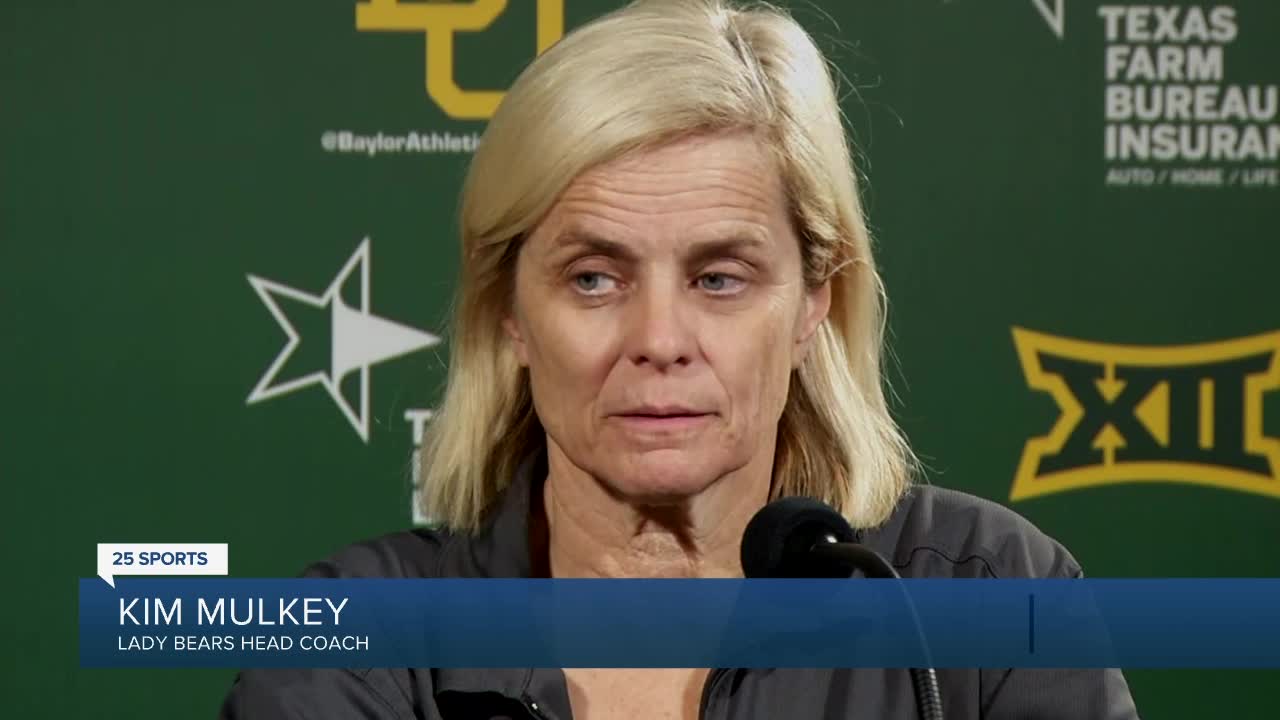 WACO, Texas — The No. 6 ranked Baylor Lady Bears return to the floor Sunday afternoon for the first time since upsetting No. 1 UConn Thursday night. Baylor will square off with Oklahoma State in the Ferrell Center at 1 p.m. The game will be televised on ESPNU.

"It's a game where I'm sure they're not happy," Lady Bear Head Coach Kim Mulkey said. "So, I'm sure its an opportunity for them to come in here and put on a good show.

"And are we so happy that we think we're just gonna roll the ball out and beat them? No. We don't operate that way. We came out today and did film room yesterday, and we worked. We worked because if what you did yesterday still looks big to you today, then you didn't do much today, and that's just been what I've been preaching to them."

LADY BEARS PICK UP SIGNATURE WIN AT NO. 1 UCONN
Prior to last year's meeting with UConn at home, Baylor was 0-11 in the NCAA era vs. No. 1-ranked opponents. However, after a 67-58 win over the top-ranked Huskies in Waco Jan. 3, 2019 and a 74-58 win at No. 1 UConn Thursday, Baylor now has two-straight wins over No. 1s. Both Baylor head coach Kim Mulkey [baylorbears.com] and UConn head coach Geno Auriema downplayed the impact of game and the result pregame and postgame, respectively. However, for Baylor it gives their non-conference resume some punch after falling to No. 5/6 South Carolina (74-59) in St. Thomas, USVI Nov. 30.
The Lady Bears moved to 3-1 vs. ranked opponents in 2019-20 and improved to 60-15 vs. Top 25 programs away from Waco since the 2010-11 school year.
Baylor is now 4-4 all-time vs. UConn, and the Lady Bears have stopped two impressive streaks in the last two victories over the Huskies. Baylor snapped UConn's 126 regular-season game win streak in 2019 before ending the Huskies' 98-game home win streak Thursday. It also marked UConn's worst home loss since Dec. 5, 2005 when North Carolina beat the Huskies by 23.
Baylor's 25th double-digit run of the season came in the fourth quarter vs. UConn, a 15-0 streak that included 10-straight points from NaLyssa Smith [baylorbears.com], and the Lady Bears held UConn to just six points in the fourth quarter.
For the second-straight season, Baylor held UConn to below 30 percent shooting from the floor. The Huskies managed just a .294 shooting mark in Waco before holding UConn to a .290 effort Thursday on 20-69 shooting.
Baylor went 11-1 in the non-conference season this year.

SEVENTEEN BIG 12 GAMES REMAIN TO CLOSE THE SEASON; OSU UP NEXT
Baylor's quest for a 10th-straight and 11th overall regular season title started Jan. 4 with a win at Oklahoma in the conference opener, but with UConn out of the way, the Lady Bears can shift focus on the Big 12 slate, beginning with Oklahoma State. Sunday, the two teams will square off at 1 p.m. on ESPNU as Baylor looks to extend its win streak over the Cowgirls to eight games. Baylor has taken 22 of the last 23 over OSU and 11-straight at the Ferrell Center. The Cowgirls' last win overall vs. BU came Dec. 30 2015 in Stillwater (52-45) and their last win over the Lady Bears in Waco was March 6, 2008 (72-68).

STREAKS CONTINUE TO BE ON THE LINE FOR BAYLOR
Baylor's .931 winning percentage since the 2010-11 season with two national titles and 17 Big 12 championships is bound to create some win streaks. Sunday, the Lady Bears will lay two streaks on the line vs. Oklahoma State: A Big 12 regular-season win streak and a home-court win streak at the Ferrell Center. Baylor has won 42-straight Big 12 contests in the regular season, which is tied for the 15th best streak in NCAA history. The Lady Bears haven't lost at the Ferrell Center since Feb. 6, 2017 and after beating UConn on the road Thursday, have the nation's longest-active win streak at 46 games. 46-straight home wins is tied for the 20th-best home win streak in NCAA history and is the second best in program history.

LADY BEARS ON THE RUN
Through 13 games the Lady Bears have 25 double-digit runs this season, including a season-high 37-0 run to begin the game vs. New Hampshire Nov. 5 and a Big-12 best 29-0 run at Oklahoma Jan. 4. In addition to the transition game on offense, Baylor's defense has allowed just 45 fast-break points on the season. Baylor is outscoring teams on the break by an average of 19.0-3.5.

THE FUTURE IS BRIGHT: LADY BEARS INK TWO TOP-10 RECRUITS FOR 2020
Baylor head coach Kim Mulkey [baylorbears.com] announced the signing of two of the top 10 players in the country Wednesday, with Irving MacArthur standouts Sarah Andrews and Hannah Gusters signing national letters of intent to join the Lady Bears in 2020.
Gusters was the first to verbally commit to Baylor in May. The 6-4 post player is the No. 9 overall ranked player in the 2020 class and the No. 2 center by espnW's Hoopgurlz. The Dan Olson Collegiate Basketball Report ranks her ninth and second, respectively as well. After helping Duncanville High School win a state championship as a freshman, Gusters averaged 14.5 points per game as a sophomore in leading the Pantherettes to a 39-2 record and the Class 6A region finals. Gusters played AAU ball for Nike ProSkills, and her maternal grandfather, Dewey Turner, played football for the University of Texas.
Andrews verbally committed to Baylor on social media Nov. 2 during an official visit. The 5-7 point guard is ranked No. 7 overall and the No. 2 point guard by espnW's HoopGurlz recruiting rankings and carries the same ranking from the Dan Olson Collegiate Basketball Report. Among Andrews' honors as a point guard for Irving MacArthur High School, she was a two-time TGCA 6A All-State selection in 2018 and 2019. USA Today named Andrews to the second-team All-Texas team in 2019 as well. The Dallas Morning-News named Andrews the top recruit in Texas. As a junior, she was the District 6-6A MVP after averaging 15.1 points, 7.0 assists, 5.6 rebounds and 2.9 steals for a MacArthur team that went 29-9. Andrews played AAU ball for Nike ProSkills.

SCORING IS TOUGH VS. THE LADY BEARS
Baylor ranked tops in the nation in 2018-19 in the following categories: Assists (850), Assists Per Game (22.4), Blocked Shots (274), Blocked Shots Per Game (7.2), Defensive Rebounds Per Game (32.0), Rebound Margin (+17.0), Rebounds (1,790), and won-lost percentage (97.4). But perhaps the most consistent category the Lady Bears led the nation in, was field goal percentage defense, holding opponents to a .318 clip. That marked the third-straight year to lead the nation in that category while also ranking in the top five in eight of the last nine years.