No. 5 Baylor Volleyball sweeps Tennessee in front of record-breaking crowd 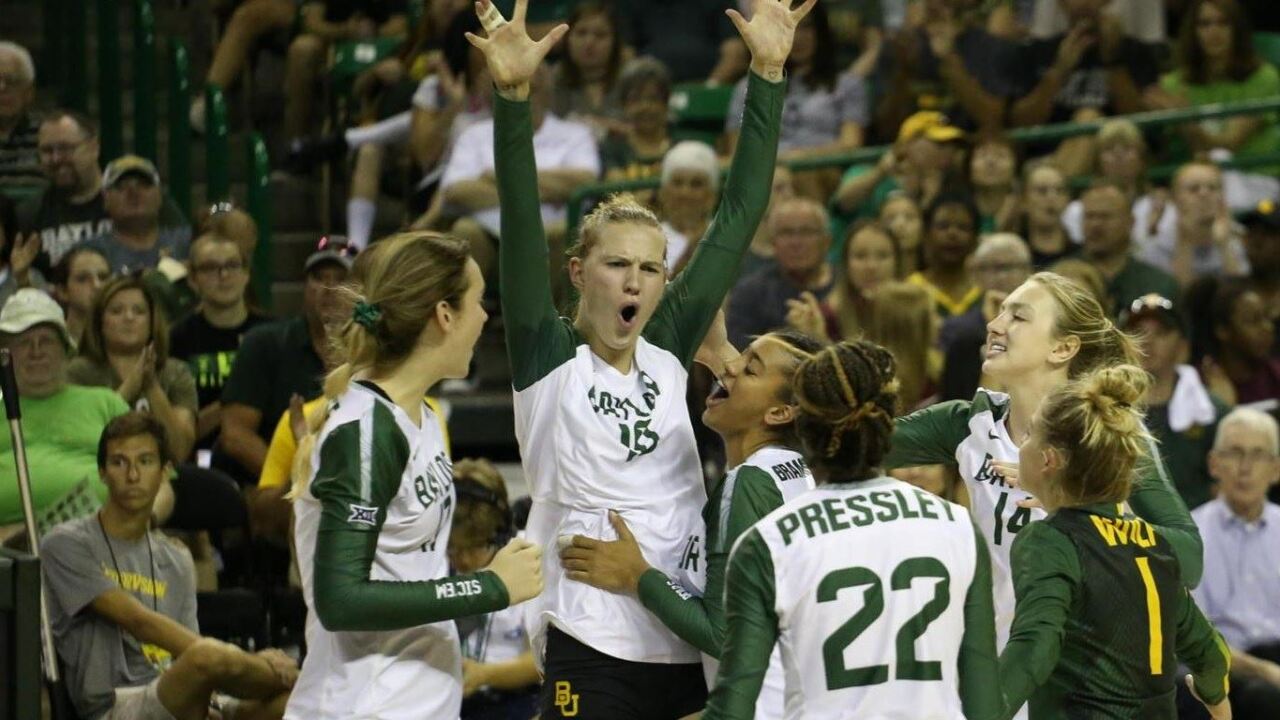 BU broke the all-time attendance mark for the third consecutive season on “Pack the House” Night and totaled 3,878 fans for Saturday’s match. The total bested last year’s record of 3,858 against LSU.

The Baylor offense hit over .300 for the third consecutive match, posting a .333 clip and defensively limited Tennessee to a .161 average.

Led by Hannah Lockin’s fourth double-double of the season, the Bears swept their fifth opponent and first at home to win the tournament title.

BU opened the match with an early 6-0 run to go up 12-6 and force the Tennessee timeout. Yossiana Pressley and Shelly Stafford paced the offense with four kills apiece, and the defense posted three blocks to take the opener, 25-18.

The Bears led a balanced offensive attack in set three. With three players posting three kills each, Baylor closed out the match on a 6-2 run for the sweep at home, 25-16.

HIGHLIGHTS
• BU broke its all-time attendance record for the third consecutive year with 3,878 fans in attendance Saturday. The previous all-time high was against LSU with 3,858 fans on Aug. 24, 2018.
• Baylor swept its fifth opponent in seven matches and for the first time at home this season.
• BU opens the season at 7-0 for the first time under McGuyre and for the first time since 2009.
• BU hit .333 for its third .300-or-better performance this season.
• Yossiana Pressley led the Bears with 12 kills and was one of three Bears to record a service ace.
• Hannah Lockin posted her team-leading fourth double-double of the season with 26 assists and 13 digs against Tennessee.
• Lockin posted a career-high three service aces against the Lady Vols.
• Baylor is now 30-11 as a ranked team under McGuyre.
• Baylor improved to 27-3 in non-conference home matches under McGuyre.
• Baylor won the Hampton Inn & Suites Waco North Baylor Invitational for the third time under McGuyre with a 2-0 record. Tennessee finished second with a 1-1 record, followed by Houston with an 0-2 mark.
• Baylor had three All-Tournament awards with Yossiana Pressley (Highest Scorer, MVP) and Hannah Lockin (Best Setter) earning recognition. Tennessee’s Alyssa Andreno (Best Blocker) and Tessa Grubbs (Best Attacker) and Houston’s Katie Karbo (Best Defender) rounded out the all-tournament honors.

STAT OF THE MATCH
3,878 – the new all-time attendance record at a Baylor volleyball match.

TOP QUOTE #1
Head coach Ryan McGuyre
On the win…
“Tennessee’s a really good team, really physical. We were able to get our blocking going again. Obviously, we were disappointed on that the other night. Three or higher per set is what we’re trying to do, or at least have an influence on the match. We served much, much better, obviously, because more were in but more were tougher. Hannah Lockin just did a great job managing the offense. To hit .333 against a good team like that is what we need to do, and I just feel her decision-making is a testament to what Coach (Sam) Erger is doing in training her. She’s just matured so much.”

TOP QUOTE #2
Head coach Ryan McGuyre
On the record-breaking crowd…
“Oh, so much fun. I felt like I was getting ready to get on an airplane and take off at the start of the game. We’ve said it all the time, but we’re a family here. And a great family knows how to multiply the joy. So, when you can make some great plays and play good volleyball and you get to multiply that by almost 4,000 people out there, it’s just exponentially exciting and fun. Our girls really want to play well, not for themselves, for the Lord and just to be able to have a platform. So, to bring something special to Waco, where Kim Mulkey has done such a great job, to catch up to her crowds. But, to let that continue to be a part of what Baylor is all about, and make us a basketball school and a volleyball school and a football school and all our other sports. We’re just glad that we’re able to contribute in that way.”

WHAT’S NEXT
BU (7-0) will host the Baylor Classic next Friday through Sunday and will face No. 18 Hawai’i and No. 21 Missouri at the Ferrell Center.