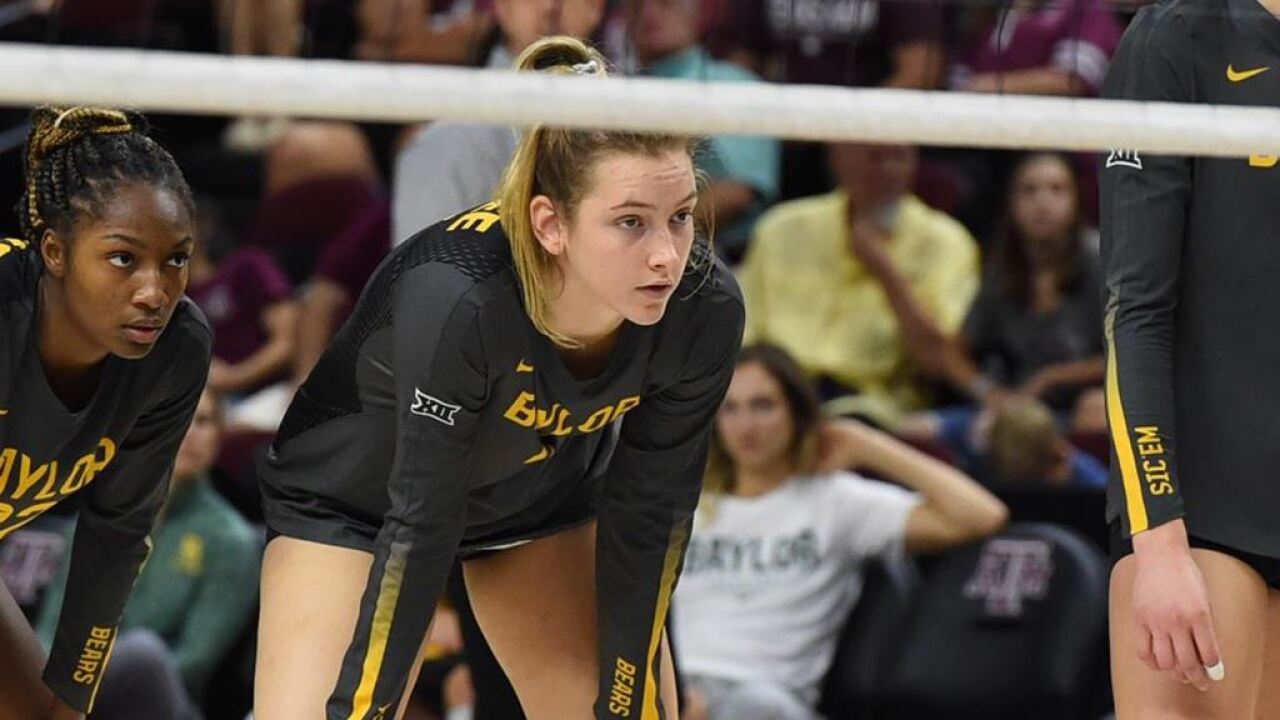 WACO, TX — The 20th-ranked Baylor volleyball team will open its 2019 campaign by traveling to the Husker Invitational Friday and Saturday in Lincoln, Neb.

BU opens its season against (RV) UCLA at 4:30 p.m. Friday afternoon then comes back to face 18th-ranked Creighton Saturday at 4:30 p.m. at the Devaney Sports Center. Although there will be no live video stream, both matches will have a live audio stream on www.BaylorBears.com [baylorbears.com].

ON THE ROAD TO OPEN THE SEASON
• Baylor volleyball will open its season on the road for the first time since head coach Ryan McGuyre’s first season in 2015.
• The Baylor volleyball program is 21-20 all-time in season openers, including 14-15 in road openers.
• The Bears are 1-3 in season openers under fifth-year head coach Ryan McGuyre.
• Last season, BU topped LSU in four sets in front of a sold-out crowd of 3,858 at the Ferrell Center.
• Under McGuyre, BU previously dropped a four-set match to No. 15 Florida State in front of a record-breaking crowd of 3,617 in the 2017 season opener.
• In 2016, the Bears dropped a four-set decision to UTRGV. In McGuyre’s first season, the Bears dropped a three-set match to No. 12 Colorado State in Fort Collins to open the 2015 season.

TOP-20 IN THE AVCA COACHES POLL
• After a 20-9 campaign last year, the Bears were tabbed No. 20 in the AVCA Top-25 Preseason Poll released Aug. 13.
• BU is playing as an ranked team to open the season for only the third time in program history and for the second-consecutive season.
• Baylor’s ranking is only second to No. 4 Texas among Big 12 opponents. Conference foes TCU and Kansas also received votes in the poll.
• Last season, the Bears received a program-best No. 12 ranking. The No. 12 ranking shattered the previous the all-time program record set in 2009 at No. 17.
• The Bears are ranked for the 38th time in program history and have received votes in the poll for 27 straight weeks dating back to last season.
• BU has 14 matches slated against ranked opponents or teams receiving votes in the preseason poll.
• Baylor went 1-4 against ranked squads last season which includes a 3-1 win over No. 2 Wisconsin on Sept. 7 in Waco.

SUCCESS ON THE ROAD
• Baylor was 7-4 on the road in 2018, including a season-best five-match win streak.
• BU is 27-20 all-time in road matches under head coach Ryan McGuyre.
• On the road, BU was 1-1 in three-set matches, 2-2 in four sets and 4-1 in five sets in 2018.
• Baylor is playing in Nebraska for the first time under McGuyre.
• Baylor is playing its UCLA for the third time under McGuyre and second-straight season at a neutral site.

BU AGAINST HUSKER INVITATIONAL OPPONENTS
• Baylor and UCLA will face off for the third time in four seasons, and the Bears are 0-2 against the Bruins under head coach Ryan McGuyre.
• BU fell in three sets to 10th-ranked UCLA in the NCAA Second Round in 2016 on the Bruins’ home court.
• Last season, the Bears fell in five sets to 10th-ranked UCLA at the USD Invitational in San Diego.
• This will be the first time in program history that Baylor will play Creighton.
• BU is 2-0 against BIG EAST schools and 2-4 against Pac-12 schools under McGuyre.

NO. 11-RANKED RECRUITING CLASS AND TRANSFERS ARE READY
• The Bears bring in eight newcomers to the 2019 roster, which includes the No. 11-ranked recruiting class by PrepVolleyball.com.
• BU got two transfers in junior Callie Williams (Tennessee) and sophomore AJ Koele (Mississippi State). Koele joined the team in January while Williams came to Baylor in July.
• BU’s freshman class consists of three outside hitters (Campbell Bowden, KJ Johnson, Sara Jones), one middle blocker (Kara McGhee) and two defensive specialists (Gabby Brown, Jena Kelly).
• Kara McGhee highlights the freshman class after coming to Baylor as the highest ranked recruit in program history at No. 6 by PrepVolleyball.com. She was named an AVCA Under Armour First Team All-American after a stellar senior season at Clark High School in San Antonio. In her final season, she averaged 4.20 kills in the middle.
• McGhee and teammates KJ Johnson and AJ Koele came in January to participate in spring practice and matches.
• The 2019 freshman class had the second-most Under Armour All-America selections in the nation with four honorees (McGhee, Johnson, Feuerborn and Bowden). All four also made PrepVolleyball.com’s top 150 players in the country, including a program-best No. 6 by McGhee.