No. 2 Baseball Stays Alive in NCAA Regionals with Record-Setting 24-6 Victory Over No. 4 Omaha

Shea Langeliers sets new NCAA postseason record for RBIs in a game with 11. 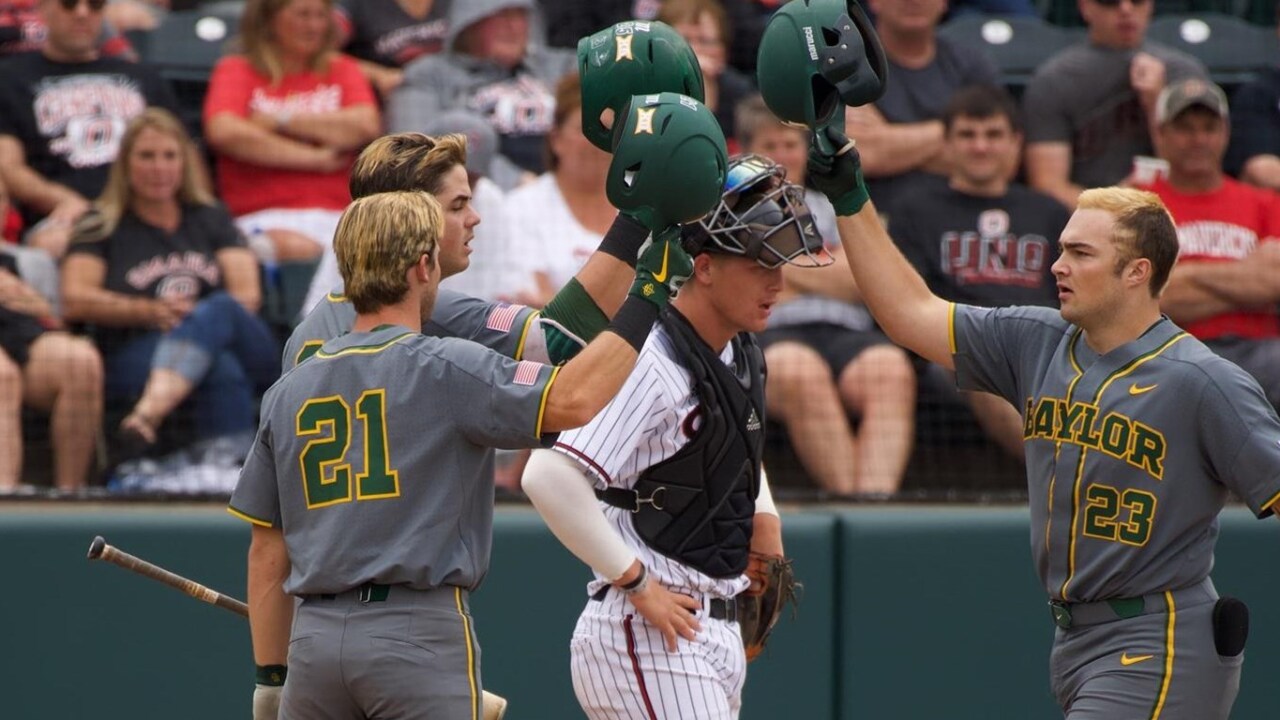 LOS ANGELES, CA — The No. 2-seeded Baylor baseball team put on an offensive clinic Saturday afternoon at the Los Angeles Regional, eliminating No. 4-seed Omaha 24-6 behind a record-setting day by Shea Langeliers and the Bears at Jackie Robinson Stadium.

Langeliers went 5-for-6 with three home runs and a career-high 11 RBI to lead the charge at the plate. His 11 RBI is not only a Baylor record, but an NCAA postseason record as well. Langeliers’ three home runs also tied a BU record.

Five Baylor starters recorded at least two hits and eight of the starting nine hit safely as the Bears scored 24 runs, their most ever in a postseason game and most in any single game since April 23, 2008 when BU scored 25 at Texas State.

Baylor (35-18) got off to a fast start as Langeliers hit his first home run of the day in the top of the first, a two-run shot scoring Richard Cunningham that gave the Bears an early 2-0 lead.

The Mavericks (31-24-1) answered promptly with a leadoff homer in the bottom of the first to cut the Bears lead to 2-1, but Baylor starter Paul Dickens responded with consecutive strikeouts and a groundout to end the inning.

The Bears kept the offense rolling in the top of the second as Nick Loftin doubled in a run and chased Omaha starter Joey Machado from the mound. Langeliers returned to the plate in the third with another home run, this time a solo shot that extended the lead to 4-1.

Omaha scratched across a run in the bottom of the third to trim the score to 4-2, but Baylor continued to add to its lead in the top of the fourth inning as three more runs came across to score. Langeliers singled in a pair and Andy Thomas joined in on the fun with a run-scoring single of his own, swelling the lead to 7-2.

Josh Bissonette led off the fifth with a solo blast, keeping the Bears’ scoring streak going, as they scored in each of the first seven innings. Thomas later doubled in another two runs to give BU a 10-2 advantage.

The Mavericks benefitted from a two-run shot in the bottom of the fifth as they tried to make a dent in Baylor’s lead, but Baylor showed no signs of slowing down at the plate, putting up a four spot in the top of the sixth. Loftin singled in a run and Langeliers hit a three-run double to move the total to 14-4.

In the seventh, the Bears poured it on with seven runs in the frame. Bissonette had an RBI single, Cunningham had a two-run double and Langeliers and Thomas hit back-to-back jacks to make it 21-4. Langeliers hit a three-run shot for his third bomb of the day, while Thomas crushed a solo homer to dead center.

After Omaha scored twice in the bottom of the seventh, both teams went down scoreless in the eighth. Then in the ninth, Baylor’s closer Kyle Hill stepped to the plate as a pinch-hitter and sliced an RBI double to make it 22-6. Hill has now driven in more runs in 2019 than he has allowed on the mound, with one.

Davis Wendzel put the cherry on top with a two-run double before Hayden Kettler finished things off on the mound with a quick bottom of the ninth. Dickens earned the win and improved to 6-2 on the year.

*Baylor is making its third-straight NCAA Regional appearance for the first time since a stretch of four-consecutive appearances between 2009-12. This is the 21st regional selection in program history.

*Baylor has won at least one game in 12 of its last 13 regionals appearances.

*Baylor is now 10-9 in games following a loss this year.

*The Bears are now 24-6 in games in which they score first.

*The Bears scored in each of the first seven innings and in eight of the nine total innings.

*Baylor tallied its 13th multi-home run game of 2019. The Bears have hit three or more homers in nine of those games, and hit five today, their most in a single-game this year.

*The Bears have hit 193 homers in 220 games under fourth-year head coach Steve Rodriguez, including 55 in 53 games in 2019. 55 is the most in a single season under Rodriguez and BU’s most since hitting 57 in 2010. The Bears have hit at least 50 home runs in three straight seasons.

*The Bears have tallied double-digit hits in 30 games this season and have outhit their opponent in 31 of their 35 wins in 2019.

*The Bears have scored double-digit runs in 17 games this year.

*Shea Langeliers hit his eighth, ninth and 10th home runs of the season, the 29th, 30th and 31st of his career. He now has hit four home runs at Jackie Robinson Stadium, previously going deep against UCLA on Feb. 24, 2018.

*Langeliers is the fifth Baylor player to have a multi-home run game in 2019. Davis Wendzel, Davion Downey, Nick Loftin and Cole Haring have all done it once as well. He is the first Baylor player to hit three home runs in a game since Aaron Dodson did so at Texas Tech on April 9, 2017.

*Andy Thomas hit his 21st double of the season, tying him for 10th place on Baylor’s leaderboard for doubles in a single season.

*Josh Bissonette hit his fourth home run of the season and 14th of his career.

*Bissonette picked up his eighth multi-RBI game of the year with two.

*Langeliers, Thomas and Bissonette were each a triple shy of hitting for the cycle.

*Richard Cunningham tallied his seventh multi-RBI game of 2019 with two.

*Hayden Kettler made his 11th appearance of the season and pitched 2.1 scoreless innings.

STAT OF THE DAY
11 – Shea Langeliers drove in 11 runs, a new NCAA record for RBI in a postseason game.

QUOTES OF THE DAY
On his performance today…

"One through nine, everybody believes in each other on this team and anybody is capable of doing what I did today. That’s a team accolade. I just came up in the right situations and happened to come through. It was a great team effort today, everybody was on base, everybody was getting hits.”

On what made the difference today…

“I think today we turned it around. We had a meeting yesterday and it was just kind of our mindset of just going out there and being aggressive. We’re a really, really good hitting team when we’re on. Hitting is contagious and when you see a guy like [Shea Langeliers] go out there and absolutely hammer the ball, it flips a switch in our head and makes us realize we can go up there and do the same. It was unreal.”

WHAT'S NEXT
Baylor will take on the loser of the No. 1 UCLA and No. 3 Loyola Marymount contest in an elimination game Sunday at 2 p.m. CT/Noon PT. If the Bears win, they will take on the winner of the Bruins-Lions matchup Sunday at 8 p.m. CT/6 p.m. PT with a chance to force a winner-take-all game seven of the regional set for Monday 9 p.m. CT/7 p.m. PT.