No. 17 Baylor Volleyball stays perfect with sweep of Syracuse 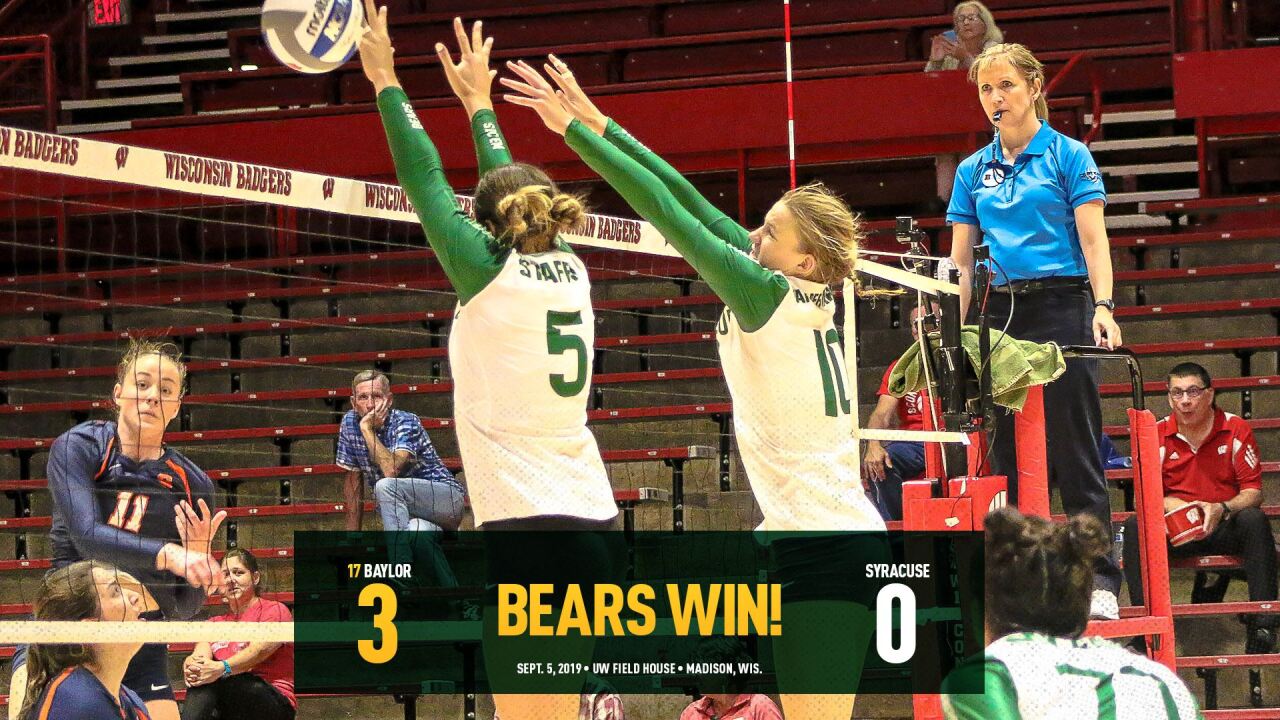 BU’s offense posted a season-high .349 hitting percentage and went 38-of-86 with only eight attack errors against the Orange. Defensively, the Bears held their opponent below a .100 efficiency for the second time this season (.099).

Yossiana Pressley paced the Bears with 11 kills on a .320 efficiency, and four other Bears posted at least six kills. Shelly Stafford and Gia Milana had seven each, followed by Marieke van der Mark and Kara McGhee with six kills in the match.

Hannah Lockin posted her second consecutive double-double while leading the team with 29 assists and 11 digs.

BU came out quick in the opening frame and forced an early Syracuse timeout when Pressley posted two consecutive kills for the 5-1 lead. With Shanel Bramschreiber at the service line, BU pushed ahead 15-6 after two consecutive blocks by van der Mark and Stafford. BU finished with a .324 hitting percentage to take the opener, 25-15.

Set two was no different. BU went up 12-7 with a McGhee kill, and then the Bears proceeded to take nine of the next 11 points for the commanding lead. Pressley closed out the set with a kill for the 25-11 win.

Syracuse came out swinging in set three and took the lead at 17-15 after a Baylor attack error. Down 20-16, BU ran off five straight points for the 21-20 lead while forcing four attack errors. BU never relinquished the lead and used a Lockin kill to take the match in straight sets, 25-23.

HIGHLIGHTS
• Thursday was the first meeting between Baylor and Syracuse. BU takes the 1-0 series lead.
• BU opened the season at 3-0 for the second consecutive season.
• BU has won nine straight sets to open the season for the sixth time in program history and for the first time since 2009.
• BU improves to 3-2 against ACC schools under McGuyre.
• BU had five players with six or more kills.
• Yossiana Pressley led all hitters with 11 kills on a .320 efficiency.
• Hannah Lockin posted her second double-double of the season and the 16th of her career.
• Baylor is now 26-11 as a ranked team under McGuyre.
• Kara McGhee posted a season-best six kills on a .667 clip.
• Marieke van der Mark had a career-high six blocks against the Orange.
• Baylor hit a season-high .349 attack efficiency against the Orange.

STAT OF THE MATCH
.349 – the hitting percentage against the Orange.

TOP QUOTE #1
Head coach Ryan McGuyre
On the win…
“With three matches this week, you never want to drag any of them out. We were off to a good start the first two sets. We still finished it off in three, but we would like to be rested and not too beat up from it. I’m really impressed – we had four players without hitting errors in the match. For them to play as cleanly as they did made it really easy. Syracuse gave us a few points with some errors, but they figured it out in the third set. (Hannah) Lockin with a timely kill was pretty good.”

TOP QUOTE #2
Head coach Ryan McGuyre
On the third set…
“Our passing settled down (late in the third set). Syracuse was all or nothing (with) hitting and serving at times. For a short segment, the stars aligned, and to their credit they had some great, tough serves. We added some errors too. We remained steady, and our defense was able to get it done. Tactically, we feel like we have a mature and smart team. We’re getting Kara (McGhee) caught up, but we were able to serve and take out some hitters.”

WHAT’S NEXT
BU (3-0) will close out play at the HotelRED Invitational by facing host and fourth-ranked Wisconsin Friday night at 8 p.m. CT. BU is 1-0 against ranked opponents so far this season.

The Baylor-Wisconsin match will be on the Big Ten Network.