No. 1 Baylor Volleyball Closes Out TCU in Straight Sets 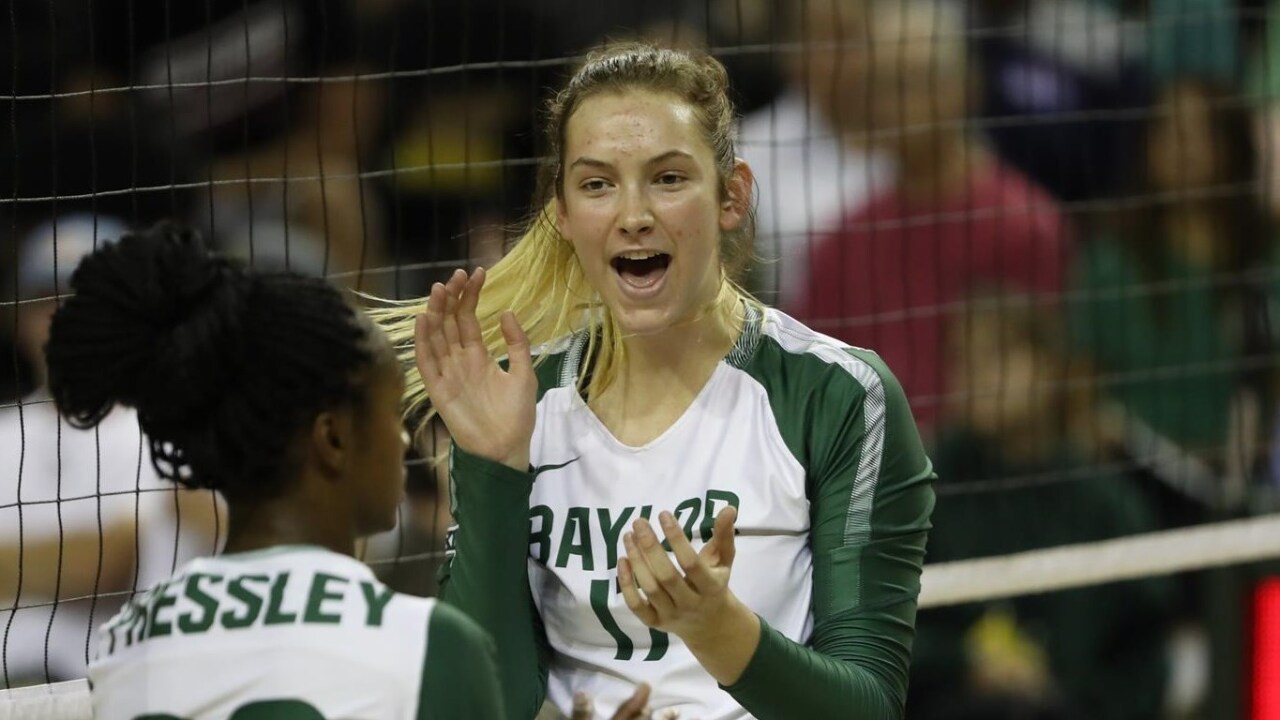 BU extends its nation-leading 28-set winning streak and 15-0 start to the season. Baylor won its longest set of the season, converting on its fifth match point in set three to remain unblemished in nine straight matches.

Junior Yossiana Pressley logged a match-high 18 kills on a .433 clip while senior Shelly Stafford added 12 kills on a .526 efficiency to lead the offense.

After Baylor opened the match with an early run, the Horned Frogs came within one at 8-7 with a kill. BU then used five kills from senior Gia Milana and four blocks to take the opener, 25-18.

BU used back-to-back Stafford kills to force an early TCU timeout at 9-5, but the Bears had to hold on to the lead after the Horned Frogs came back from a 19-13 deficit to pull within two at 19-17. Two consecutive blocks from McGhee closed out the second set at 25-20.

The Bears trailed for a majority of the third set and fell behind 15-10. After a block pulled the Bears within one at 18-17, TCU took the next two points to force the Baylor timeout. BU continued to chip away and tied it up at 22-22 with a Stafford service ace.

TCU had five set points wiped away by the Bears, and two consecutive blocks closed out a back-and-forth third frame to help Baylor close it out in straight sets, 34-32.

HIGHLIGHTS
• Baylor swept its 13th opponent in 15 matches and its ninth-straight opponent.
• BU has now won 45 sets and only dropped two during the 2019 season.
• Out of 45 sets won, 10 of those have been decided by two points (set three: 34-32).
• Seven sets have been decided in extra points this season with BU winning them all (Wisconsin, Marquette, Missouri, K-State, Iowa State twice, TCU).
• Set three had 17 ties and seven lead changes.
• BU extended its own school record with its 15th consecutive win.
• BU is on a program-best 28-set winning streak which ties Stephen F. Austin for the nation’s best set streak.
• BU remains the only undefeated team in DI college volleyball with a 15-0 record.
• BU hit over .300 for the third time in conference action.
• Hannah Lockin posted 36 assists and a career-high seven blocks.
• Four players posted a team-leading eight digs.
• Pressley and Stafford posted double-digit kills against the Horned Frogs.
• Kara McGhee put up a season-best eight blocks.
• Baylor is now 38-11 as a ranked team under McGuyre.
• Baylor improved to 16-7 all-time against TCU and won its fifth consecutive match over the Horned Frogs.

STAT OF THE MATCH
8 – the season-high block count for freshman Kara McGhee.

TOP QUOTE
Head coach Ryan McGuyre
On the win…
“I feel like the extra points were good, and we were able to finish it off. We played fairly strong at the end. It’s on us sometimes when we’re going extra points when we can finish it off a little bit sooner. I loved that Marieke (van der Mark), who has not been jump serving a lot, can go back there and get us a big ace. I thought that was huge in changing the momentum and getting us back tied. Ultimately, I thought the upperclassmen and seniors were good. Gia (Milana) was good for us early. Yossi (Pressley) was great for us down the stretch. Shelly (Stafford) was super strong throughout the match.”