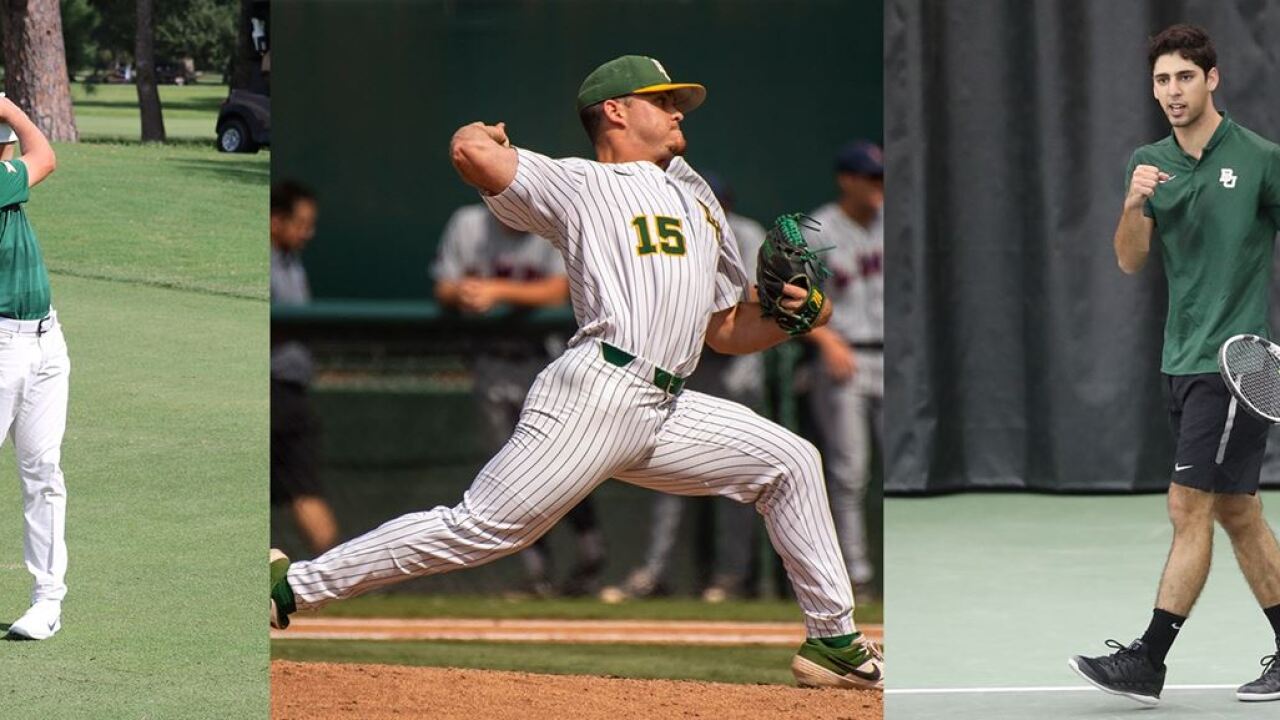 WACO, TX — Three Bears were named Big 12 Conference 2019 Spring Scholar-Athletes of the Year, it was announced today by the Conference after a vote of each sport’s respective head coaches. Senior pitcher Kyle Hill earned the honors for baseball, Colin Kober for men’s golf and Jimmy Bendeck for men’s tennis.

Hill, a senior finance major with a 3.45 grade-point average was named Big 12 Baseball Scholar-Athlete of the Year. He is a three-time Academic All-Big 12 First Team honoree (2017-19) and a unanimous 2019 All-Big 12 First Team selection on the field. A 10th round draft pick of the Seattle Mariners, Hill did not surrender a run in 29.1 innings pitched on the season, collecting seven saves and finishing with a record of 6-0. He was named a First Team All-America selection by Collegiate Baseball.

Kober, a junior accounting major with a 4.00 GPA and 100 percent participation on the year was named Co-Big 12 Men’s Golf Scholar-Athlete of the Year, sharing the honor with Hayden Springer of TCU. Kober posted a 73.86 career stroke average across 28 rounds, including 12 rounds at par or better. The Southlake, Texas, native is a three-time Big 12 Academic Team honoree, earning Academic All-Big 12 First Team recognition in 2018 and 2019, while also earning rookie team honors in 2017.

Bendeck, a senior finance, entrepreneurship and corporate innovation major with a 3.91 GPA and 100 percent participation in matches on the season earned Big 12 Men’s Tennis Scholar-Athlete of the Year honors. As part of the No. 1 doubles tandem in the country for nine weeks, he earned All-America honors with teammate Sven Lah. The Hollywood, Fla., native also recorded a near-perfect record in Conference doubles action at the No. 1 Doubles sport, 4-1, and earned All-Big 12 First Team honors.

Hill, Kober and Bendeck join 2018 Big 12 Volleyball Scholar-Athlete of the Year Shelly Fanning as the four Baylor representatives for the honor during the 2018-19 school year.

The Big 12 Conference established its Scholar-Athlete of the Year Award in 2012-13. A recipient is named in each conference-sponsored sport. Every Big 12 institution and affiliate members nominate one individual per sport with the winners selected by a vote of the league head coaches for the sport, who are not allowed to vote for their own student-athletes. Scholar-Athlete of the Year nominees must be a junior or senior (academic standing), have a cumulative grade point average of 3.20 or higher, participate in at least 20 percent of the team’s scheduled contests and have a minimum of one year in residence at the institution.