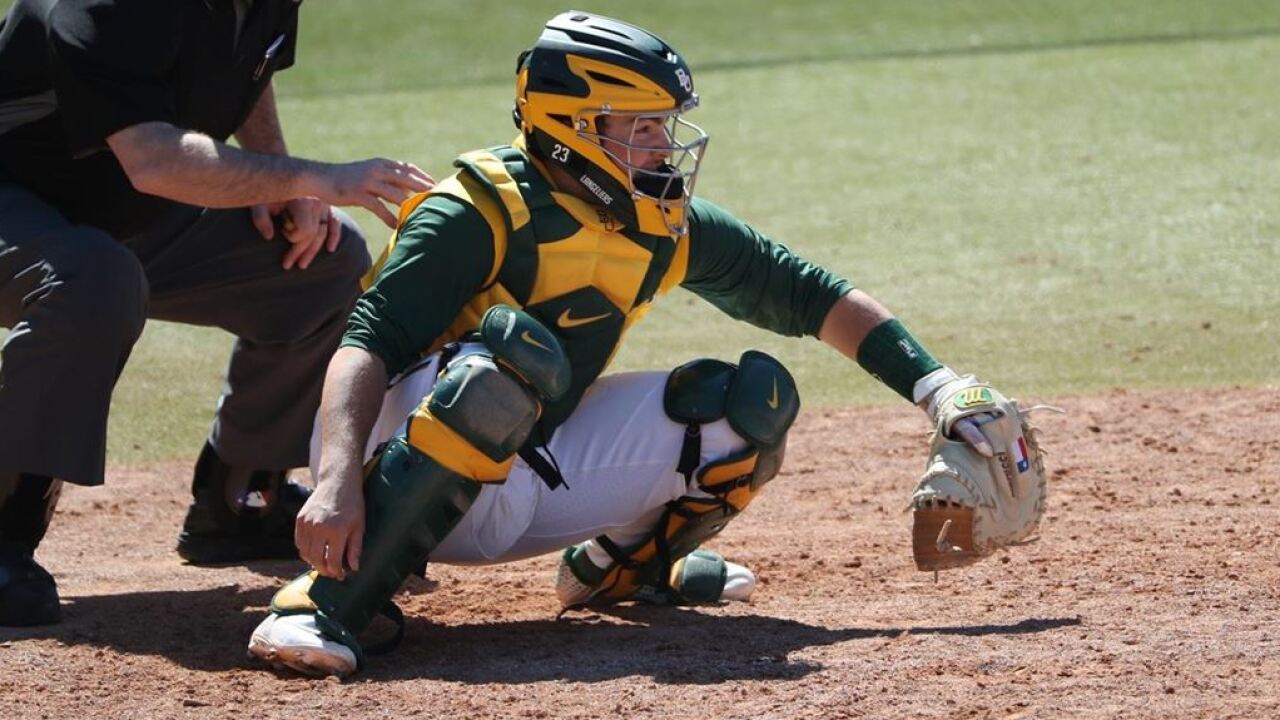 WACO, TX — Four Bears were named to the ABCA/Rawlings All-Midwest Region Team, it was announced by the organization this week. Catcher Shea Langeliers, third baseman Davis Wendzel and relief pitcher Kyle Hill were each named first team selections, while designated hitter Andy Thomas was named to the second team. The honors are the first All-Region honors for all four Bears.

Langeliers, the second-highest Bear to be drafted after being the ninth overall selection of the Atlanta Braves, the Keller, Texas, native was named the All-Midwest Region catcher after batting 308 (180-for-622) in 44 games, with nine doubles, one triple and 10 home runs. He drove in 42 runs, slugged .530 and had an on-base percentage of .374. Behind the plate, he did not have an error in 393 chances and threw out 14-of-25 would-be base stealers (56.0 percent).

Wendzel, who was the 41st overall selection in the 2019 MLB First Year Player Draft by the Texas Rangers, was named the All-Midwest Region First Team third baseman after finishing the regular season with a batting average of .385, good for 32ndnationally. The 2019 Big 12 Co-Player of the Year, Wendzel led the league with a.404 batting average. His on-base percentage of .500 was also tops in the conference and 19th-best in the country. Wendzel's slugging percentage of .647 was also good for third in the conference. He had 60 total hits, with 17 doubles and eight homers, second-most on the team. His 17 doubles through the regular season were also second-most on the team and ranks fourth in the Big 12. The San Clemente, Calif., native also stole a team and career-high 11 bases on the season. He finished the 2019 season with a slash line of .367/.484/.610. He drove home 42 runs, had eight home runs and 19 doubles.

Hill, the first Bear to be named a finalist for the NCBWA Stopper of the Year Award, was named to the All-Midwest Region first team after having an outstanding year for the Bears on the mound. He did not allow a run (0.00 ERA) in 23 appearances, 29.1 innings of work on the season, finishing with a 6-0 record and seven saves. The 32-game, 29.1 innings scoreless streak is the longest in program history for one season and overall, he boasts a 32.2 scoreless inning streak over 24 games dating back to the 2018 season. He cemented his spot in the Baylor record book with 139 career strikeouts in relief to sit fourth on the career list and is third on BU’s all-time appearances leaderboard (93 games) and tied for fifth on the all-time relief appearances chart (82). His 0.00 ERA leads the Big 12 and his six wins on the year are the most by a reliever nationally that does not have at least one start on the year. He has received four First Team All-America honors and one third team All-America honor so far this postseason.

Designated hitter Andy Thomas was named to the second team after finishing second on the team with a batting average of .335. He started 47 games, all but one at designated hitter, slugging .519 with career-best marks of 22 doubles and four home runs. His 22 doubles led the team and ranked in the top five in the Big 12 and top 25 nationally for much for much of the season. He also was tied for third on the team with 62 total hits.

Langeliers, Wendzel and Hill will be nominated for ABCA/Rawlings All-America honors, which will be announced on Saturday, June 15.