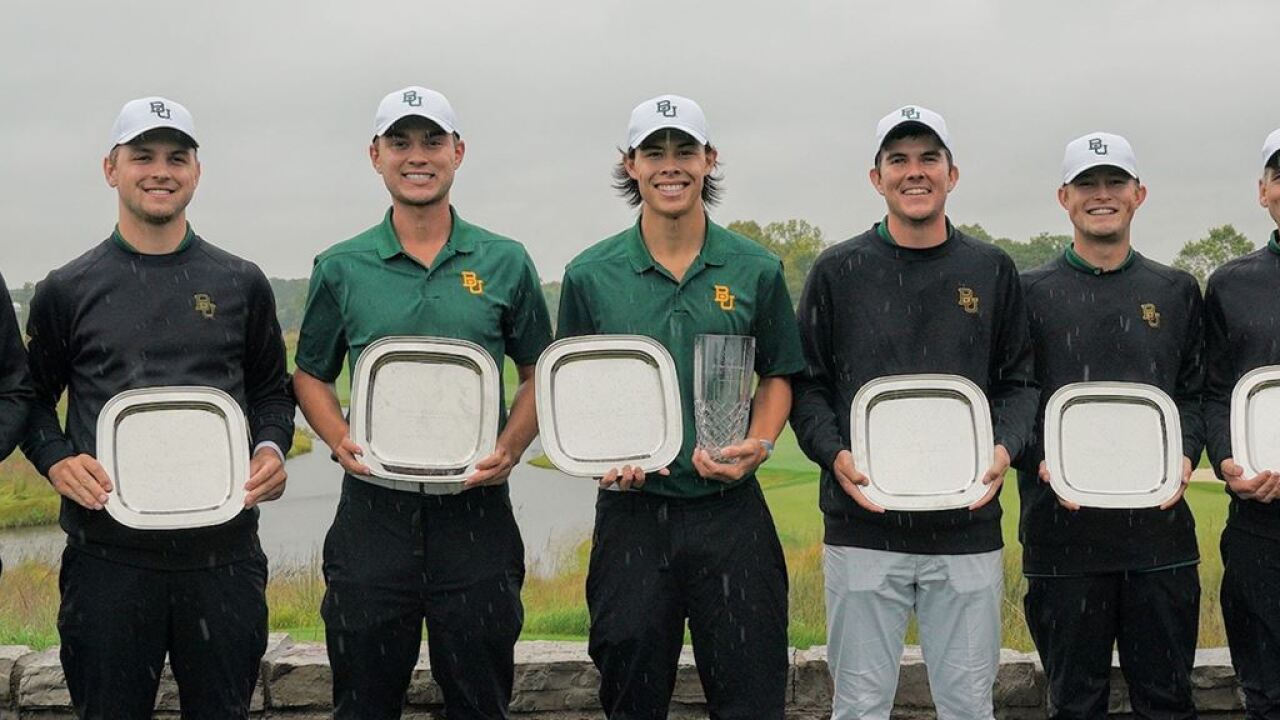 INDEPENDENCE, Minn. — Baylor men’s golf battled through tough conditions and an hour-long lightning delay to claim the 2019 Gopher Invitational title by two strokes over Texas A&M. The Bears shot 4-over-par 288 in Monday’s final round to finish atop the leaderboard in the 13-team field at 4-under 848.

The Bears entered the round with a three-shot lead and extended it to as many as seven strokes, but Texas A&M fought back and took a one-shot lead about two-thirds of the way through the round. The Bears and Aggies were tied at 6-under when the tournament entered an hour-long lightning delay with the final players for each team on the 14th hole. BU had a one-shot lead with only freshman Johnny Keefer remaining on the course and two holes to play. Keefer made a par on No. 17, while Texas A&M’s Williams Paysse hit his drive out-of-bounds and made a double-bogey.

With a three-shot lead on the final hole, Keefer was able to take an unplayable lie when his drive found tall grass on the edge of the bunker. He hit his third shot on the par-5 18th into the middle of the fairway, put his fourth on the green and secured the Baylor win with a two-putt bogey.

Keefer tied for third place in his collegiate debut. He shot 3-over 74 in the final round and finished three shots back of the individual medalist. Cooper Dossey recorded is fifth career top-5 finish by taking fifth place at 2-under 211 after a final round of 1-under 70. Travis McInroe posted his third consecutive rounds of 2-over 73 to tie for 30th place at 6-over 219. Colin Kober and Mark Reppe tied for 36th place at 7-over 220, with Reppe recording a final round of even-par 71 and Kober shooting 8-over 79.


STAT OF THE DAY
13 – this was Baylor’s 13th tournament win under head coach Mike McGraw. The Bears played their first tournament under McGraw on the same course five years ago, winning the 2014 Gopher Invitational. It was McGraw’s 43rd win as a Division I head coach, and it was the Bears’ first title since winning the inaugural Big 12 Match Play Championship on Oct. 14, 2018.

Baylor returns to tournament action in 11 days at the Fighting Illini Invitational. The three-day, 54-hole tournament runs Sept. 20-22 at Olympia Fields (Ill.) Country Club. Follow @BaylorMGolf on Twitter, Instagram and Facebook for updates throughout the season.