September was the driest or hottest September for many states 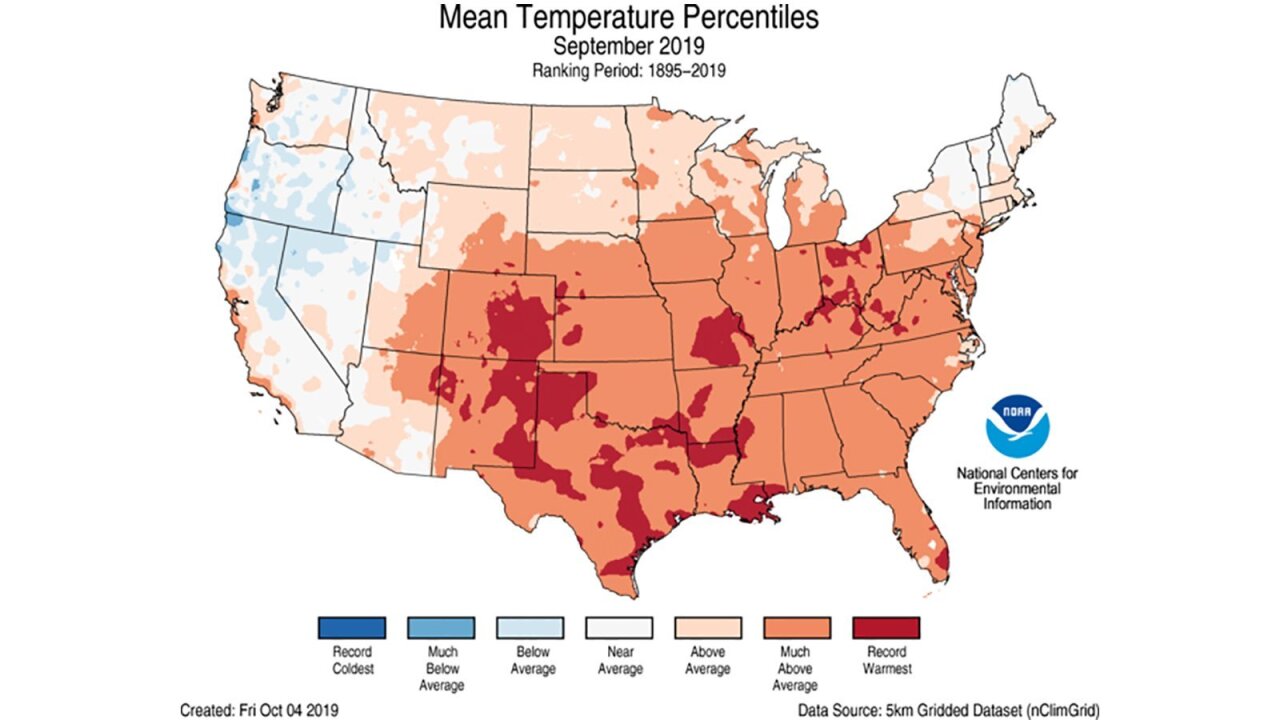 NOAA/NOAA
Last month was one of the hottest and driest Septembers on record for many states -- tied as the second-warmest September on record in the contiguous United States, according to data from the National Centers for Environmental Information.

It was a record-setting September, but maybe not for the reasons you might think.

Last month was one of the hottest and driest Septembers on record for many states -- tied as the second-warmest September on record in the contiguous United States, according to data from the National Centers for Environmental Information.

Here are the details, and what all this means in October..

Alaska had its third-warmest September on record

The statewide average temperature last month was 44.7 degrees, which may not seem very warm to those of us in the other 49 states but is uncharacteristic for the state. Septembers in Alaska typically average 40.6 degrees, and this one was the warmest since 1995.

Alaska wasn't the only one having a weird month. In every state except eight -- mainly on the West Coast and the northernmost tip of the Northeast -- above- to much-above-average temperatures were seen during the month. A ridge of high pressure helped heighten the warmth between the Rocky Mountains and the East Coast, the NCEI said.

The trend seems to be continuing into October. Record-breaking temperatures have been set across the eastern United States already in October.

There is some good news, though. Temperatures should start feeling more and more like fall pretty soon, starting this week in the Northeast and moving South by the weekend.

Huge parts of the country had a 'flash drought'

While the West Coast and parts of the Northern Plains experienced much more precipitation than usual -- with North Dakota having its wettest September on record -- the South, mid-Atlantic and Ohio Valley were begging for some hydration.

Mississippi, Alabama, Georgia, Florida, Kentucky and West Virginia all had their driest September on record.

For five other states -- Tennessee, Virginia, Maryland, Delaware and New Jersey -- last month was among their top 10 driest Septembers, too.

The high pressure ridge that's to blame for the super-warm September temperatures was also responsible for the extra-dry conditions in the South and the Southeast.

The bad news is, it doesn't look like the dryness is going away soon. Nearly 44% of the Southeast is still in a drought state -- and it could expand to cover the entire Southeast.