Chad Daybell appears in court after remains found on his property, bail set at $1 million

Chad Daybell was booked into the Fremont County Jail after police say they found what appears to be human remains on his Salem property.

Chad Daybell, the husband of a woman whose children have been missing since September, appeared in court on Wednesday after two sets of human remains were found on his property.

During Wednesday's court appearance, prosecutor Rob Wood said the remains were those of 7-year-old Joshua "JJ" Vallow and 17-year-old Tylee Ryan, both of whom have been missing since September.

Kay Woodcock, JJ's grandmother, also confirmed to East Idaho News that one set of the remains are those of her grandson's.

Police have not yet publicly confirmed the identity of the remains.

Daybell faces two counts of evidence destruction, alteration or concealment. His bail was set at $1 million. Should Daybell make bail, he will be required to stay in certain parts of Idaho and will wear an ankle monitor. He also cannot have contact with the families of the victims.

Daybell was arrested Tuesday shortly after police served a search warrant on his home in Idaho.

Two criminal complaints allege Daybell willfully concealed or aided and abetted in the willful concealment of human remains, "knowing that said human remains were about to be produced, used and/or discovered as evidence in a felony proceeding, inquiry and/or investigation authorized by law, with the intent to prevent it from being so produced, used and/or discovered."

Daybell is married to Lori Vallow, the mother of JJ and Tylee. She was arrested in Hawaii in connection with her children's disappearance on Feb. 20 and was extradited back to Idaho. She remained jailed despite several attempts to lower her bond. 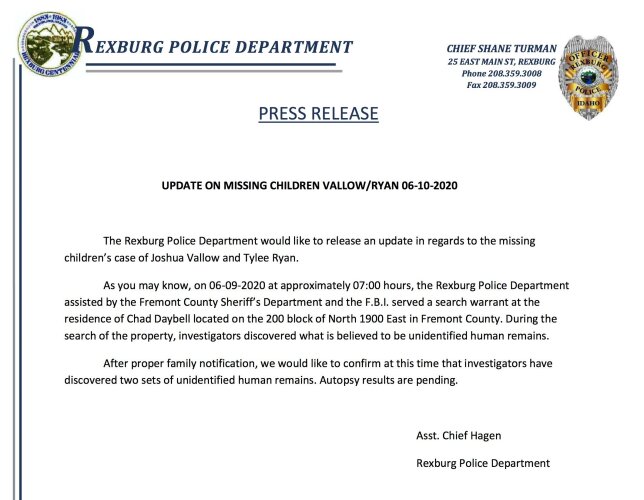 This story was originally published by KIVI in Bosie, Idaho.