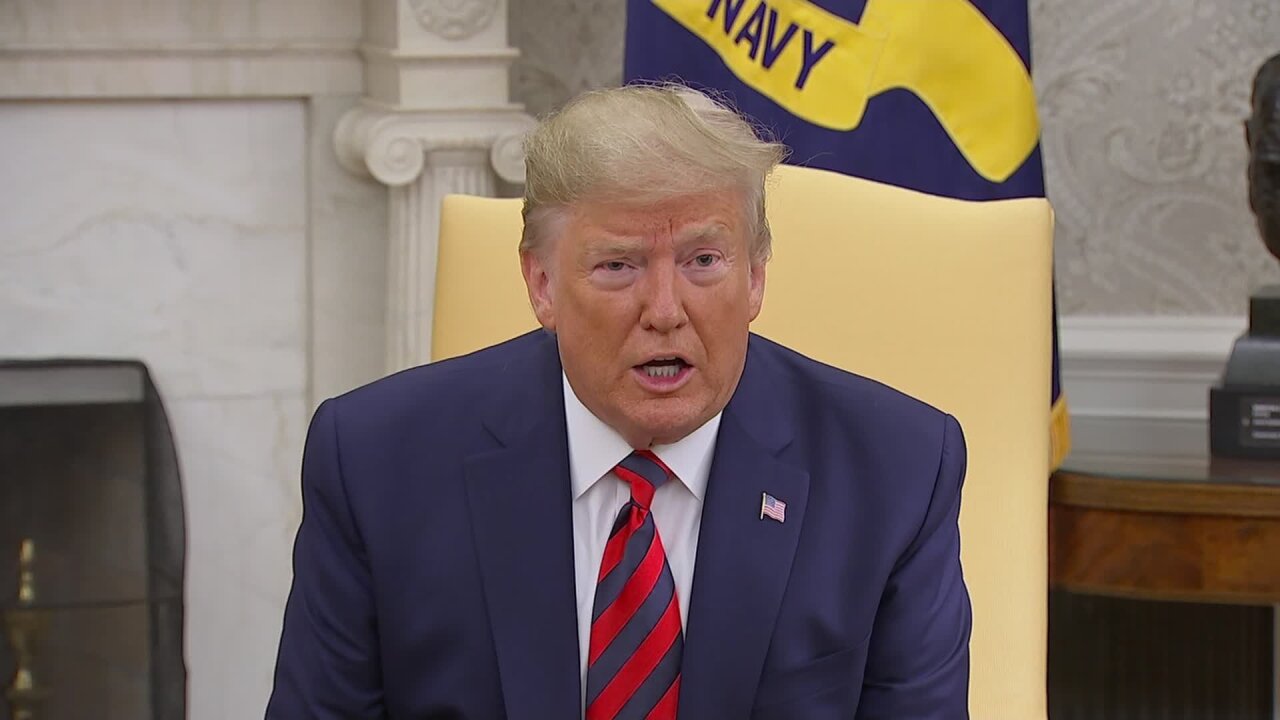 Some House Democrats who have long held out on supporting impeachment proceedings of President Donald Trump are signaling the whistleblower complaint at the center of a dispute between Congress and the administration could mark a new era, with at least one lawmaker flipping her stance and fully backing the effort.

A handful of Democrats who have spent Trump's presidency warning against the consequences of a distracting impeachment inquiry have used the latest allegations -- where Trump admitted to discussing his possible 2020 political rival Joe Biden with Ukrainian President Volodymyr Zelensky -- to signal a "tipping point."

While most left some wiggle room in their stance on impeachment, Democratic Rep. Angie Craig of Minnesota issued a statement saying she is "immediately" calling for proceedings.

"We must safeguard our electoral process and our very democracy from outside threats. For this reason, the current investigations into corruption must continue. And when there is an abuse of power of this magnitude, it is our responsibility to stand up for what is right. This is why I am calling to open impeachment proceedings -- immediately, fairly, and impartially."

In a Washington Post op-ed published Monday night, seven freshman Democrats wrote that "if these allegations are true, we believe these actions represent an impeachable offense."

"We do not arrive at this conclusion lightly, and we call on our colleagues in Congress to consider the use of all congressional authorities available to us, including the power of 'inherent contempt' and impeachment hearings, to address these new allegations, find the truth and protect our national security," the op-ed read.

The move by the freshman Democrats -- Reps. Gil Cisneros of California, Jason Crow of Colorado, Chrissy Houlahan of Pennsylvania, Elaine Luria of Virginia, Mikie Sherrill of New Jersey, Elissa Slotkin of Michigan and Abigail Spanberger of Virginia -- marks a notable escalation from a group of lawmakers who are vulnerable in the 2020 election. Crow had previously called for an impeachment inquiry earlier in the summer, but the other lawmakers were signaling their potential openness for the first time.

Trump acknowledged on Sunday that he discussed Biden in a July call with Ukraine's president. CNN has previously reported that Trump pressed Zelensky in the call to investigate Biden's son, Hunter, according to a person familiar with the situation. That call was part of the whistleblower complaint submitted to the inspector general of the intelligence community in August. The complaint hasn't been shared with lawmakers, despite Democratic calls for the acting director of national intelligence to comply with a legal requirement to do so.

Rep. Vincente Gonzalez, a Texas Democrat who has thus far resisted calling for Trump's impeachment, told CNN on Monday that he would reconsider his position if the administration does not turn over a whistleblower complaint regarding the President and Ukraine to the House Intelligence Committee this week.

Speaking to CNN's Poppy Harlow on Monday, Gonzalez said if Trump threatened to withhold military aid to Ukraine in exchange for a reopening of an investigation into Biden's son, he would support an impeachment inquiry. Trump has admitted to discussing Biden with Zelensky but has denied doing anything improper. There is no evidence of wrongdoing by Biden or his son, Hunter.

"I don't think we have a choice under the Constitution. We must move forward with impeachment proceedings. I don't think we'll have much of a choice," Gonzalez said.

Gonzalez reiterated his stance in statement to CNN following the interview, saying he would "seriously consider joining the calls to open an impeachment inquiry" if the complaint isn't handed over.

Rep. Dean Phillips, a Minnesota freshman Democrat who has also not embraced impeachment, said Monday that Democrats "must pursue articles of impeachment and report them to the full House of Representatives for immediate consideration" if reports about the whistleblower complaint are corroborated.

"This continues a pattern of behavior that is corrupt at best, treasonous at worst, and puts our rule of law at risk," Phillips said in a statement. "Our Constitution transcends any person, politician, or political party, and I call on the House Foreign Affairs, Intelligence, and Judiciary Committees to use every legal mechanism possible to obtain all relevant evidence."

And Rep. Stephen Lynch, a Massachusetts Democrat who has long pushed against pursuing impeachment, separately said on Monday that the complaint could lead to impeachment, calling the situation "deeply concerning."

"If fully substantiated, it will be of momentous consequence, including the possibility of initiating impeachment proceedings," Lynch said in a statement.

As recently as last month, he was arguing that conducting impeachment proceedings would hand Trump another four years in the White House.

In a news release Monday night, Rep. Rosa DeLauro, a Connecticut Democrat, said she has been reluctant to call for impeachment, but "these actions regarding the 2020 election are a turning point."

Impeachment, she said, "may be the only recourse Congress has" if Trump is enlisting foreign help in the 2020 election.

Their comments came after House Intelligence Committee Chairman Adam Schiff told CNN's Jake Tapper over the weekend that Trump may have "crossed the Rubicon" and impeachment could be "the only remedy" equal to the offense.

The controversy surrounding Trump's dealings with Ukraine has added fuel to already-heated discussions among Democrats about whether to pursue impeachment. The House Judiciary Committee is conducting an investigation to determine whether or not to recommend articles of impeachment, but Democratic leaders are divided about the issue.

House Speaker Nancy Pelosi has thus far resisted calls to launch such proceedings over concern that an impeachment push would be dead on arrival in the Republican-controlled Senate and would imperil Democrats' 2020 election chances.

Pelosi, in a letter to all members of Congress over the weekend, said that the standoff could escalate Democrats' ongoing investigation into Trump.

"If the Administration persists in blocking this whistleblower from disclosing to Congress a serious possible breach of constitutional duties by the President, they will be entering a grave new chapter of lawlessness which will take us into a whole new stage of investigation," she wrote.

But some lawmakers say they are hearing from constituents who want to see Democrats take action beyond just more investigation, and soon.

"Phones have been ringing all day with constituents calling to tell me they support impeachment, particularly following the President's corrupt dealings with Ukraine," Virginia Rep. Don Beyer wrote on Twitter Monday. "They are right."