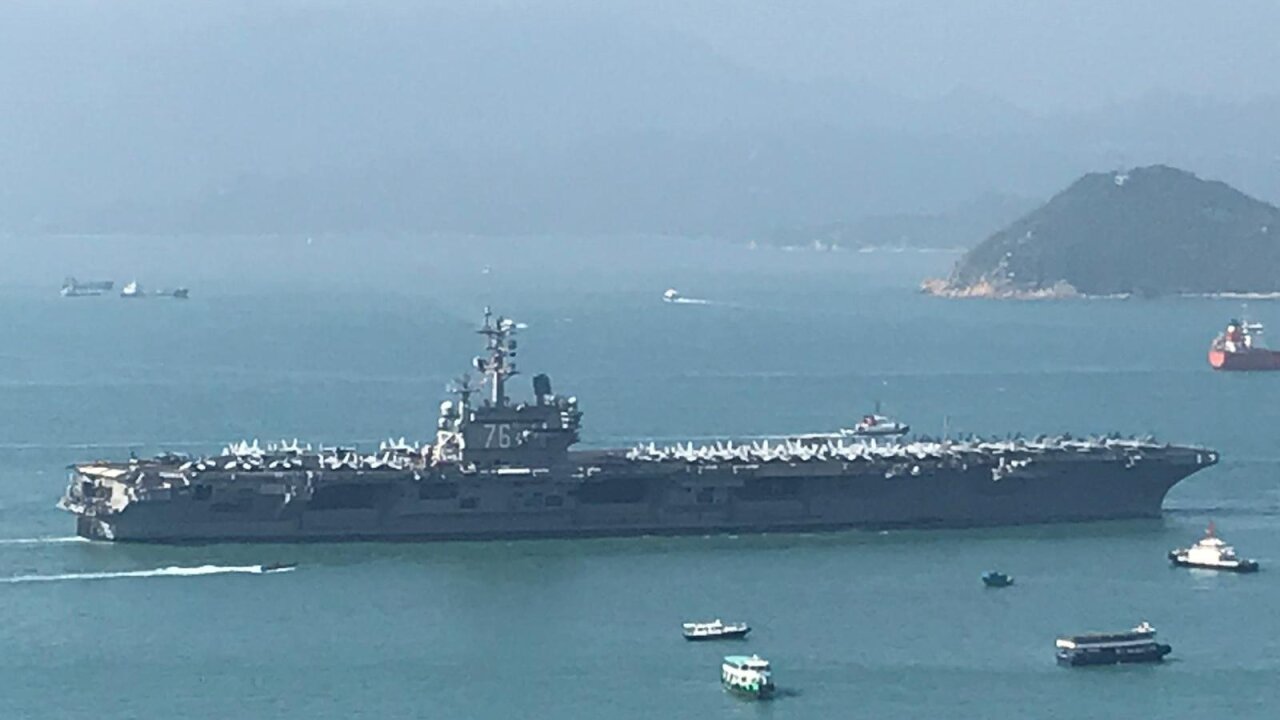 China will ban US warships and military aircraft from making stops in Hong Kong in the wake of Washington passing legislation supporting the territory's pro-democracy protesters, the country's Foreign Ministry said Monday.

"In response to the unreasonable behaviors of the US side, the Chinese government decides to suspend the review of requests by US military ships and aircraft to visit Hong Kong as of today," Chinese Foreign Ministry spokeswoman Hua Chunying said at a news conference in Beijing.

Hua also announced that Beijing would impose sanctions on several US non-governmental human rights organizations that have been monitoring and reporting on the protests in Hong Kong.

US President Donald Trump last week signed the Hong Kong Human Rights and Democracy Act into law after it sailed through both Houses of the US Congress with almost unanimous bipartisan approval.

The new law would permit Washington to impose sanctions or even suspend Hong Kong's special trading status over rights violations.

Shortly after the bill was signed into law, China's Foreign Ministry accused the US of "bullying behavior," "disregarding the facts" and "publicly supporting violent criminals."

On Monday it took more concrete action, banning consideration of visits by US warships to one of their longtime ports of call in Asia and a favorite spot for those aboard to get rest and relaxation after long periods at sea.

Just over a year ago, the aircraft carrier USS Ronald Reagan and ships in its strike group carried some 7,000 personnel into Hong Kong in what at the time was seen as an easing of tensions between Washington and Beijing over China's military buildup in the South China Sea. That visit came after China had denied a similar port call earlier in 2018.

Since the Reagan visit, the amphibious command ship USS Blue Ridge, the flagship of the US Seventh Fleet, and the US Coast Guard Cutter Bertholf have made notable stops in Hong Kong, both in April.

But in August, while protests were heating up in the city, China rejected scheduled visits by the amphibious transport dock USS Green Bay and the guided-missile cruiser USS Lake Erie.

Monday's Chinese Foreign Ministry announcement followed harsh words from Beijing last week after the US Navy sailed warships within 12 miles of Chinese-claimed islands in the South China Sea on Wednesday and Thursday in so-called "freedom on navigation" operations.

Those actions "upheld the rights, freedoms, and lawful uses of the sea," Cmdr. Reann Mommsen, a spokeswoman for the Navy's 7th Fleet, told CNN in a statement.

But China called them "a highly dangerous provocation," according to Ren Guoqiang, spokesman for Beijing's Defense Ministry.

"The trespassing hurts regional peace and stability, harms China's sovereignty and security, and endangers the lives of frontline officers and soldiers of both sides," Ren said, according to a story posted on the military's English-language website.

In addition to the rebuke to the US military on Monday, China said it was sanctioning several US NGOs for so-called bad behavior during the Hong Kong protests.

The Chinese government accused the NGOs of supporting "anti-China people" and said they were instigating protesters "engaging in extreme crimes" in pursuit of Hong Kong's separation from China.

It is unclear what sanctions will be imposed on the NGOs or how the organizations might be affected.