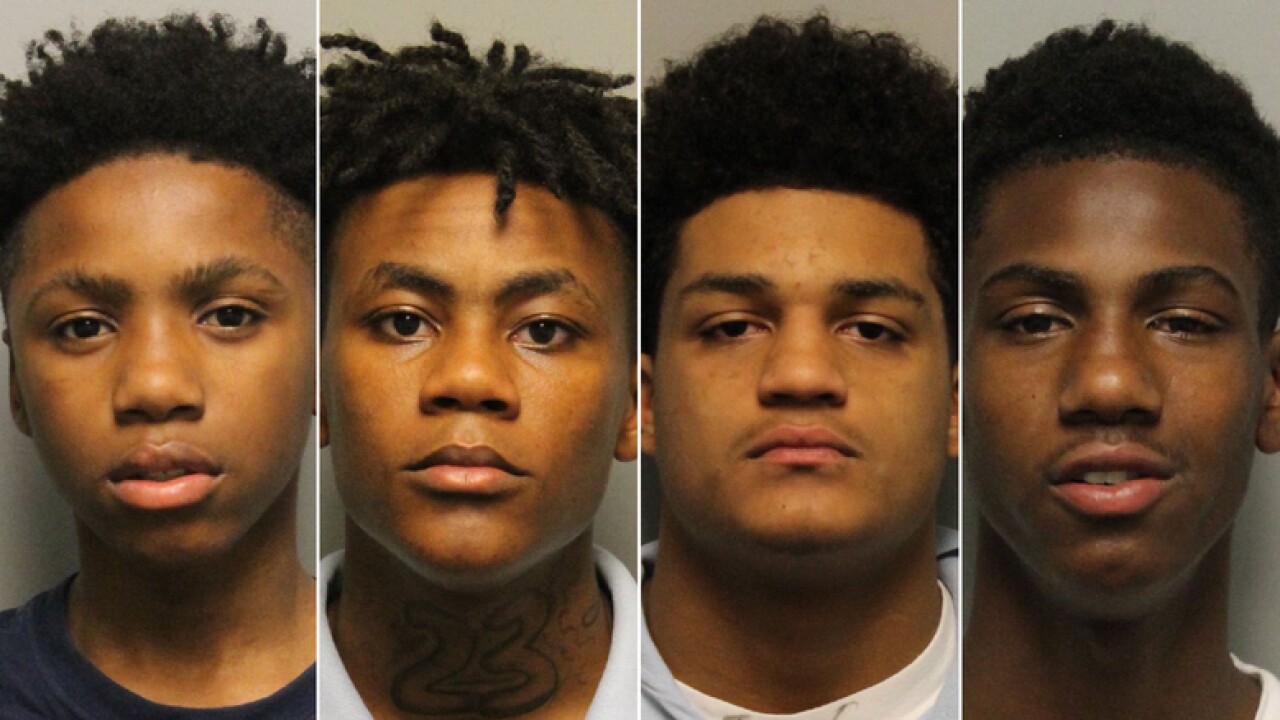 NASHVILLE, TENN. — Four teenagers were able to escape through the front door of a Nashville, Tennessee, juvenile detention center because of critical oversights by the company that managed the facility, officials said Monday.

The teens, two of whom are accused of murder, fled the Davidson County Juvenile Detention Facility Saturday after being left unsupervised, police said.

Police say the company that manages the center waited more than half an hour after the escape before notifying police the four teens -- ages 15, 16 and 17 -- ran out the detention center's front entrance.

"In 30 minutes, with a fast walk you could be two miles away," Nashville Police Chief Steve Anderson said. The youths have not been found as of Monday night.

Youth Opportunity Investments, a private detention contractor which has managed the center since 2015, fired three of its employees and suspended one for three days in reaction to the escape, the company said.

"Youth Opportunity acknowledges that several members of its security personnel made improper decisions that, when combined, led to an opportunity for the four youth to leave the facility," the company said in a statement.

Anderson said he still has questions about what happened.

"I don't have any indication that a crime has been committed, (or) that there was some overt act to assist in their escape," he said. "But, certainly a lot of gross negligence."

A staff supervisor had asked the four teenagers to clean inside the facility after the 9 p.m. usual bedtime, according to Youth Opportunity Investments' incident summary. A "disturbance" caused the supervisor to leave and the teens were left unsupervised.

The teens entered an elevator that had been left open by a staff member, according to a statement from Davidson County Juvenile Court. They were "able to convince a staff member to make a call to Master Control and request that the elevator be sent to the basement, which is an unsecured area youth are not permitted to access."

The teens "more than likely had some assistance once they were outside" the detention center, Whited said.

The contract between Youth Opportunity Investments and Nashville police says the contractor will not attempt to apprehend escapees and that they will "immediately call 911," contact a contract monitor and report all attempted escapes.

"It appears that multiple breakdowns in systems and processes to include policy and procedures were not followed which ultimately lead to this escape incident," Youth Opportunity Investments' summary said. "The youth were able to work together as a group while not being properly supervised by staff to devise a way to escape from the Davidson County Juvenile Detention Center."

Anderson said that he saw an internal investigative report from Youth Opportunity Investments, but "had more questions than I had answers" after reviewing it. As a result, Anderson asked a judge to allow the Major Case Task Squad to investigate the incident.

"What I saw in their report appeared to be a pattern of maybe nonchalant behavior," Anderson said.

CNN has reached out to Youth Opportunity on these specific claims made by the court and police chief.

2 teens are accused of murder

Two of the teens are accused of murder and the others were arrested on armed robbery and gun possession charges, police said.

Decorrius Wright, 16, is accused in the February murder of Kyle Yorlets, according to police. Yorlets was a Nashville musician who was shot and killed when a group of five minors robbed him of his wallet and he refused to hand over his keys.

Morris Marsh, 17, is accused in the April murder of Charles Easley, the release said.

Brandon Cauthers, also 17, is being charged as an adult in an armed robbery case from August last year and Calvin Hows, 15, was arrested in November on charges of gun possession and auto theft, police said.

The Juvenile Crime Task Force has met with family and associates of the teens, and have visited locations they're known to frequent, Whited said.

"There's individuals in the community who know where these juveniles are," said Capt. Tommy Widener with Nashville Police Youth Service's Division.

There's no indication at this point that any of the teens are outside of Nashville, Whited said.