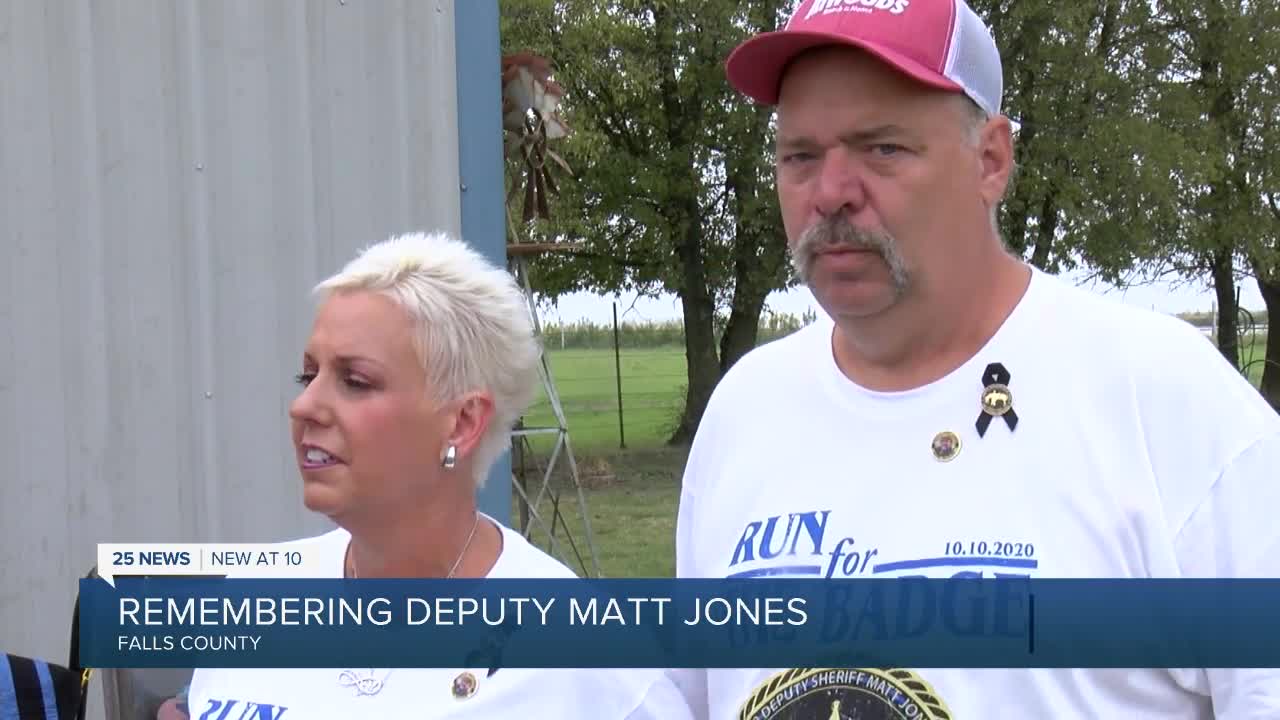 MART, Texas — One day before the one year anniversary of the tragic death of Falls County Deputy Matt Jones, dozens gathered at his family's farm honored him with a “Walk for the Badge” at his parents' farm in Mart.

Jones died October 11, 2019 along Highway 6 near Riesel. Jones and Riesel Police Chief Danny Krumnow were assisting a motorist when a vehicle hydroplaned into them.

Jones died on the scene.

"You miss him every day," Falls County Sheriff Ricky Scaman said. "You expect to come in and see him and he isn't there. It's still pretty tough."

Scaman and a few other Fall County deputies ran laps around the Marlin High School track early Saturday morning as part of the nationwide "Run for the Badge" event, which aimed to raise money for the Law Enforcement Memorial and Museum in Washington D.C.

Jones is honored on a wall at the museum dedicated to fallen officers.

"We all wanted to do something in honor of his tribute," Scaman said.

At his family's farm, several of the people closest to him took part in a memorial walk. Along the route, the family placed signs with pictures of Jones and favorite memories of the fallen deputy.

"It's hard seeing pictures, but we know he lived life to the fullest," Debbie Jones, Matt's mom, said. "He lived every day to the fullest."

The group walked to a fishing tank on the farm where Jones spent lots of his time. When they arrived, they held a ceremony to dedicate it in his name.

"Matt loved fishing and hunting and target practice," Debbie said. "He just loved the tank. He'd be out at that tank all the time. He taught me how to shoot guns at the tank and that makes it more special."

The group also held a silent auction as part of the event. In total, they raised more than $1,700. You can help by donating to the cause here. The team name is "Jonsey #3112."

"It's created to help the families of fallen officers in the line of duty," Scaman said. "So we all supported that and paid a due for that and everything."

Debbie says over the past year, she has received an overwhelming amount of support during her time of grief.