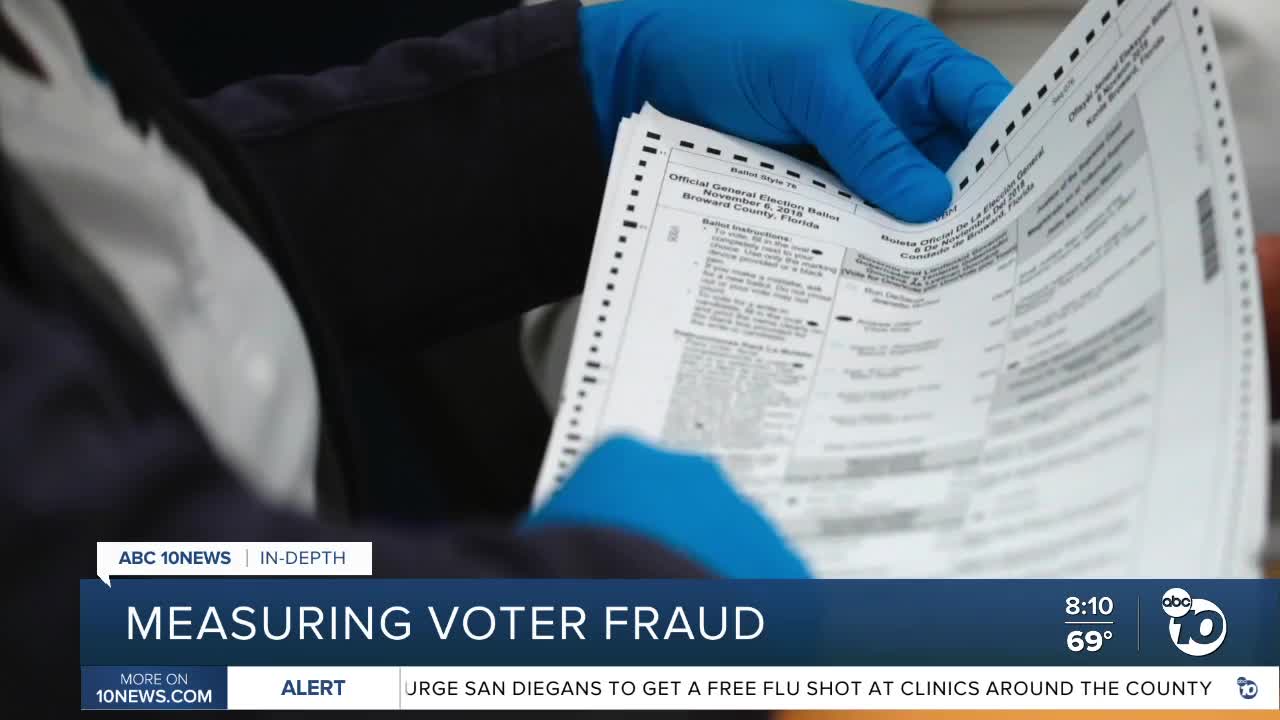 The topic of voter fraud has been in the spotlight more than usual this election cycle, with President Donald Trump encouraging supporters to volunteer as poll watchers and tweeting about election-related fraud at least eight times in the last week.

SAN DIEGO, Calif. - The topic of voter fraud has been in the spotlight more than usual this election cycle, with President Donald Trump encouraging supporters to volunteer as poll watchers and tweeting about election-related fraud at least eight times in the last week.

There are several categories of voter fraud, including ineligible voting by non-citizens or felons; or double voting, when someone illegally casts more than one ballot.

Voter fraud is cheating by voters themselves, which is distinct from other forms of election malfeasance, and there have been dozens of studies aimed at measuring it over the last few years.

There are essentially two types of academic research on voter fraud: studies that examine documented cases of voter fraud, such as ones mentioned in news articles or criminal prosecutions; and studies that try to predict how much fraud might be going undetected, using advanced statistics and artificial intelligence techniques.

Pam Smith, the former president of the non-partisan Verified Voting Foundation, summarizes the research on documented voter fraud this way: “There's an infinitesimal amount of voter fraud where a voter is intentionally doing something fraudulent.”

The Heritage Foundation, a conservative think tank, keeps a database of known cases of voter fraud. It now has 1,298 examples.

The examples date back to 1982 and cover both presidential and off-year contests. There were more than 1 billion votes cast in presidential contests alone during that span.

But those are the known cases. What about undetected cases of voter fraud?

This is an area of study called election forensics, where researchers use advanced statistics and machine learning to estimate irregularities.

One study by researchers at Harvard and Stanford universities looked at voter registration data in the 2012 election and used algorithms to estimate that the maximum amount of double voting was .02%, or 1 out of every 4,000 ballots.

But the researchers also showed that most, if not all, of these possible double votes, could have actually been innocent clerical errors. The researchers audited poll books in Philadelphia and found a 1% error rate; an error rate of 1.3% would be enough to explain all of the irregularities.

There are other kinds of fraud, called election fraud, like the illegal ballot harvesting in North Carolina’s 9th District in 2018. But Smith, of Verified Voting, said those cases are actually easier to catch because they typically involve multiple people.

In the very rare cases when they do happen, judges can order an election re-do.

“Fraud on any kind of massive scale, as we've heard talked about, that doesn't happen,” Smith said. “And there are safeguards and guardrails in place to prevent it.”

Smith said California’s guardrails include pre-election testing of voting machines and other equipment and audits after the election.

California voters can also sign up for a free tool called “Where’s My Ballot?” The service will send automated alerts the moment your ballot is received and counted.

This story was first reported by Derek Staahl at KGTV in San Diego, California.