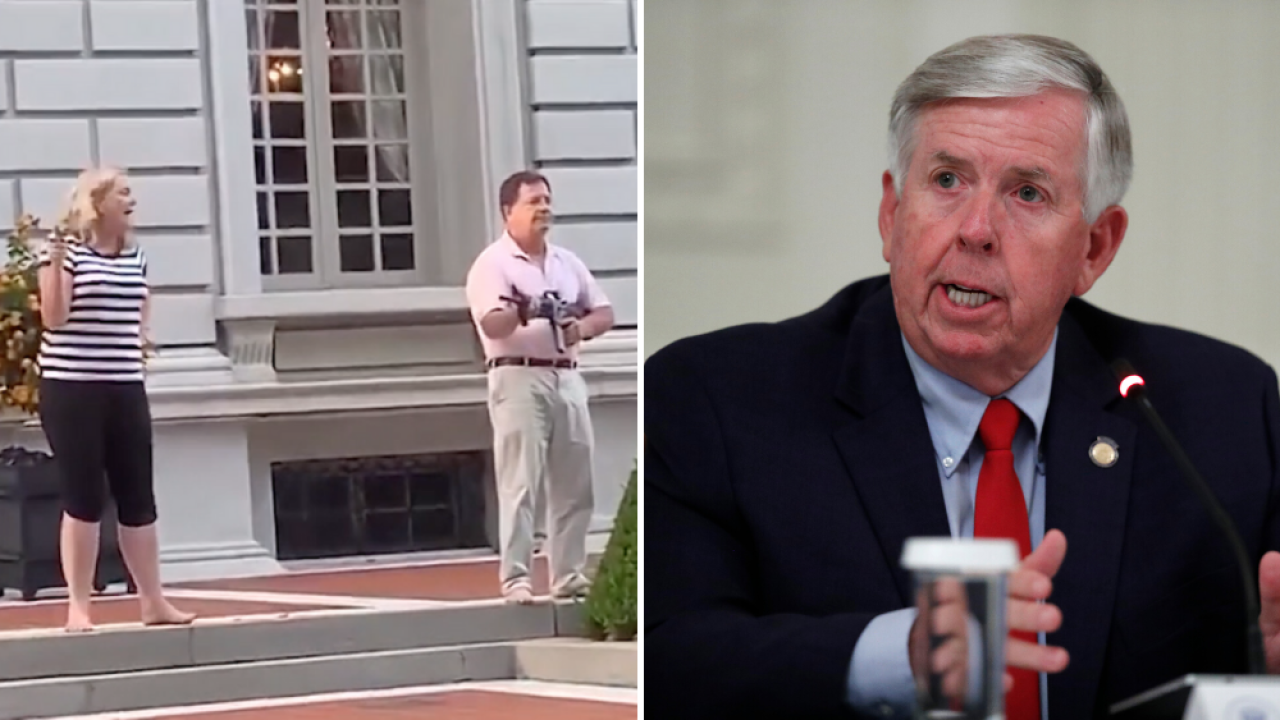 Mark and Patricia McCloskey were seen on video June 28, brandishing an AR-15 rifle and a handgun while confronting protesters marching through the Portland Place neighborhood, where the McCloskeys live.

Police in St. Louis executed a search warrant at the McCloskey home Friday at the behest of St. Louis City Circuit Attorney Kim Gardner’s office. The couple’s lawyer said police seized an AR-15 from the house and that the couple had previously surrendered the handgun.

On Tuesday, after introducing a new grant program for small businesses during a press conference, Parson told reporters that he wanted “to address the McCloskey situation in St. Louis.”

Parson said the McCloskeys were using the Castle Doctrine to protect their property from protesters, “which they had every right to do.”

During his time as a state legislator, Parson helped expand the Castle Doctrine in Missouri — a stand-your-ground law that permits property owners to use any means deemed necessary, including deadly force, to protect themselves and their property when threatened.

Parson said police weren’t notified of the situation before reiterating “that couple had every right to protect their property."

He then slammed the District Attorney's office, without directly naming Gardner, for reportedly considering an indictment in the case.

“What they should not go through is a prosecutor attempting to take their constitutional rights away by filing charges against them for protecting their property,” Parson said.

He then said it was very difficult to remove an elected official — like Gardner — from office, calling it “one of the things we need to address in future sessions.”

It was at that point Parson invoked the White House.

Parson said Trump promised to do “everything he could within his powers to help with this situation and that he would be taking action to do that.”

After opening up to questions, Parson acknowledged that “all I know is what I’ve heard” about the McCloskey case and that “I don’t know all the details of it,” but that “it’s quite evident they are standing on their property.”

“I think the president and the attorney general of the United States (William Barr) are going to take a look at it,” Parson said.

He later added, “The president doesn’t like what he’s seeing and the way these people are being treated. I know the attorney general was represented on that phone call today, so I think you’ll see some sort of actions. I think they’re going to look into things.”

Parson plans to have follow-up conversations with Trump after expressing his concern over the limited power the Missouri governor has to remove other elected officials, among other things.

“I don’t want to make it sound like he’s going to come in here and remove somebody from office, but I’m going to guarantee you the president’s focused on what’s happening here,” Parson said.

Parson has a press conference planned for Wednesday when he is likely to announce details of a special session about violent crime in Missouri.

The governor declined to discuss specifics of the special session. Democratic lawmakers have been calling for a special session on police reform since George Floyd’s death in late May sparked protests nationwide about policing and racism.

He blamed the protests for detracting from an officers’ ability to focus on “the street crimes that are happening out there and these violent crime situations.”

This story was originally published by Tod Palmer on KSHB in Kansas City, Missouri.