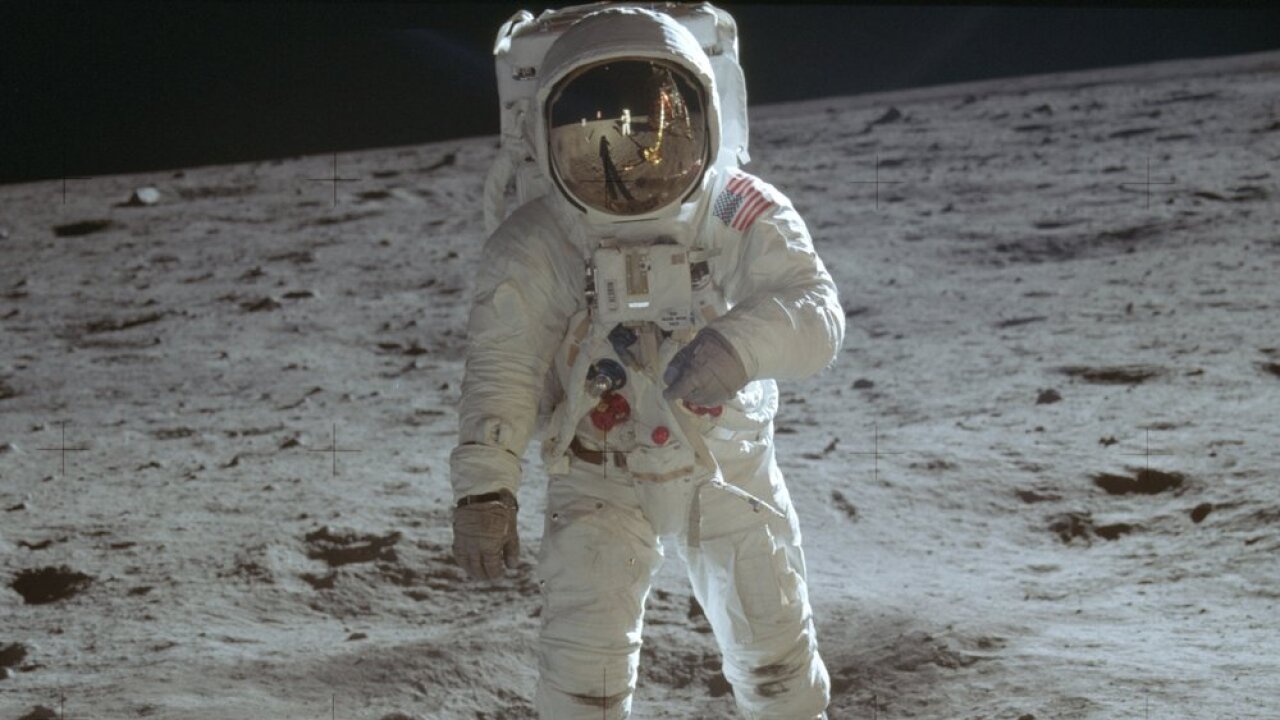 (Copyright 2020 The Associated Press. All rights reserved. This material may not be published, broadcast, rewritten or redistributed.)
In this July 20, 1969 photo made available by NASA, astronaut Buzz Aldrin, lunar module pilot, walks on the surface of the moon during the Apollo 11 extravehicular activity. (Neil Armstrong/NASA via AP)

CAPE CANAVERAL, Fla. (AP) — A moonstruck nation celebrated the 50th anniversary of humanity’s first footsteps on another world Saturday, gathering in record heat at races and other festivities to commemorate Neil Armstrong and Buzz Aldrin’s “giant leap” on Apollo 11.

At NASA’s Kennedy Space Center, cars were backed up for miles outside the visitor complex at opening time. In Armstrong’s hometown of Wapakoneta, Ohio, nearly 2,000 runners competed in “Run to the Moon” races.

“We’re celebrating the 50th anniversary of perhaps the most historic event in my lifetime, maybe in anybody’s lifetime, the landing on the moon,” said 10K runner Robert Rocco, 54, of Centerville, Ohio. “The ’60s were very turbulent. But that one bright wonderful moment was the space program.”

The Eagle lunar lander, carrying Armstrong and Aldrin, landed on the Sea of Tranquility on July 20, 1969. Armstrong was the first one out, proclaiming for the ages: “That’s one small step for man, one giant leap for mankind.”

“Few moments in our American story spark more pride than the Apollo 11 mission,” President Donald Trump said in a Space Exploration Day message. His statement reiterated the goal of sending astronauts back to the moon within five years and taking “the next giant leap — sending Americans to Mars.”

Armstrong died in 2012, leaving Aldrin, 89, and command module pilot Michael Collins, 88, to mark the golden anniversary. Both astronauts and the Armstrong family met with Trump in the Oval Office on Friday, with Collins pushing for a direct mission to Mars and skipping the moon, and Aldrin expressing dismay at the past few decades of human space exploration.

On Saturday, Aldrin and Armstrong’s son, Rick, traveled with Vice President Mike Pence to Florida to visit the Apollo 11 launch pad and the building where the astronauts suited up for liftoff on July 16, 1969, now known as the Neil Armstrong Operations and Checkout Building.

In New York City, organizers moved a moon-landing party from Times Square into a hotel because of the heat wave. Youngsters joined former space shuttle astronaut Winston Scott there, as a giant screen showed the Saturn V rocket lifting off with the Apollo 11 crew in 1969.

Countdowns were planned across the country later in the day at the exact moment of the Eagle’s landing on the Sea of Tranquility — 4:17 p.m. EDT — and Armstrong’s momentous step onto the lunar surface at 10:56 p.m. EDT. The powdered orange drink Tang was back in vogue for the toasts, along with MoonPies, including a 55-pound (25-kilogram), 45,000-calorie MoonPie at Kennedy’s One Giant Leap bash.

Halfway around the world in the 100-degree heat (38 degrees Celsius) of Kazakhstan, an American, Italian and Russian, launched on a Russian rocket to the International Space Station. Only one of the three — cosmonaut Alexander Skvortsov — was alive at the time of Apollo 11. The three already living on the space station also were born long after the moon landings.

The crew deliberately modeled its mission patch after Apollo 11′s: no astronaut names included to show the universal nature of space flight. Morgan explained in a NASA interview that Apollo 11, and now his flight, represents “an accomplishment of the world and not one single country.”

Follow AP’s full coverage of the Apollo 11 anniversary at: https://apnews.com/Apollo11moonlanding

The Associated Press Health and Science Department receives support from the Howard Hughes Medical Institute’s Department of Science Education. The AP is solely responsible for all content.