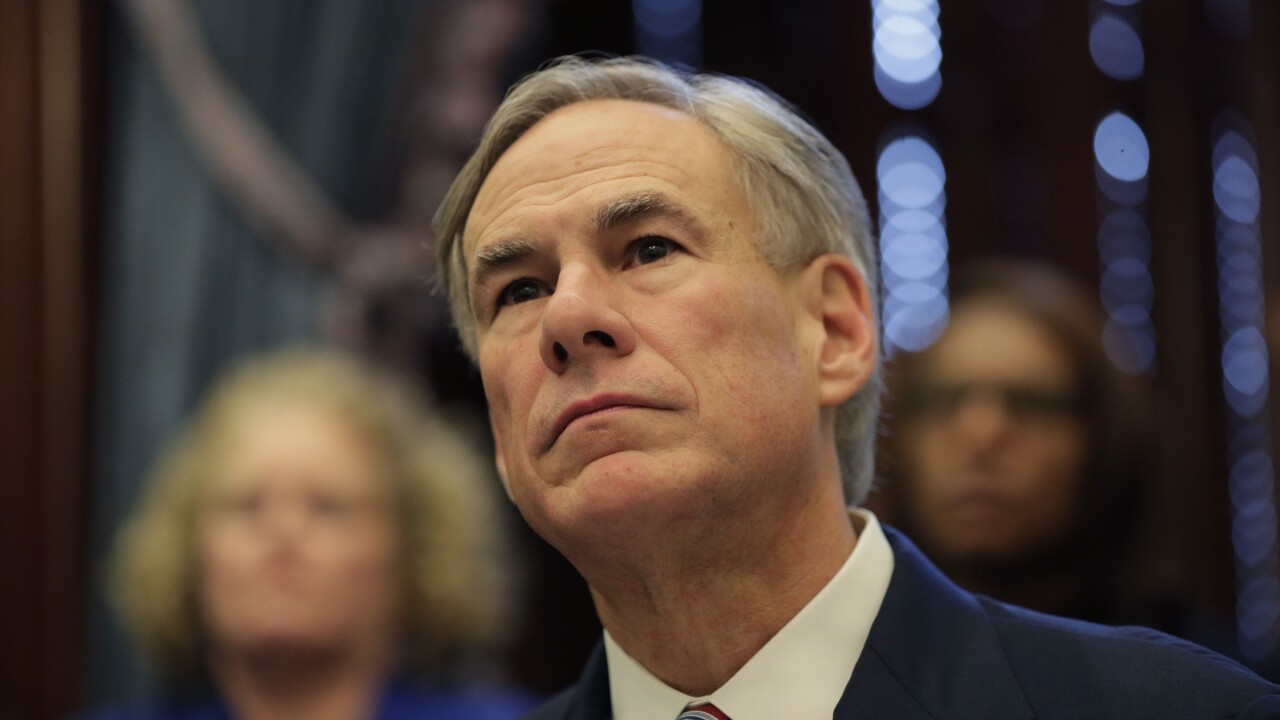 Copyright 2020 The Associated Press. All rights reserved.
Eric Gay/AP
Texas Gov.Greg Abbott gives an update on the coronavirus, Friday, March 13, 2020, in Austin, Texas. Abbott declared a state of disaster Friday as the coronavirus pandemic spread to all of the state's biggest cities. (AP Photo/Eric Gay)

DALLAS (AP) — Leaders in two of Texas’ biggest cities are calling on the governor to empower local governments to order residents to stay home as the state’s continued surge in coronavirus cases tests hospital capacity.

Austin Mayor Steve Adler told CNN’s “State of the Union” Sunday that he wants Gov. Gregg Abbott, a Republican, to return control of his city to the local government as its hospitals face a potential crisis.

“If we don’t change the trajectory, then I am within two weeks of having our hospitals overrun,” Adler, a Democrat said. “And in our ICUs, I could be 10 days away from that.”

Texas reported it’s highest daily increase in the number of confirmed COVID-19 cases Saturday, and hospitalizations from the disease caused by the coronavirus have continued to climb.

The Fourth of July weekend has also seen some defiance of Abbott’s orders closing bars and requiring people to wear face coverings in public in much of the state.

The mask order — which carries a $250 fine — came as part of the most dramatic about-face Abbott, a Republican, has made as he retreats from what stood out as one of America’s swiftest reopenings.

Harris County Judge Lina Hidalgo, the top county official in the Houston area, said she’s grateful for the mask mandate but that a stay-at-home order is needed.

“We don’t have room for incrementalism, we’re seeing these kinds of numbers, nor should we wait for all the hospital beds to fill and all these people to die, before we take drastic action,” Hidalgo, a Democrat, told ABC’s “This Week.”

Houston has rapidly become one of the American cities hit hardest by the virus. In addition to strained hospital capacity, it needs help meeting the demand for testing, Mayor Sylvester Turner told CBS’ “Face The Nation” Sunday.

Over the last month, the proportion of tests that come back positive for the virus has rocketed from about one in 10 to nearly one in four, Turner, a Democrat, said.

In the face of the city’s rising infection rate, Texas’ Republican party leadership last week affirmed plans to hold its in-person conventio n in Houston. And not all Texans are following measures meant to limit the virus’ spread over Independence Day weekend.

People flocked to cookouts and lakes to celebrate Saturday, with some not wearing masks or appearing to keep a safe distance from others. In Fort Worth, a bar may have its license suspended after hosting a “Tea Party Protest” Saturday, WFAA-TV reports.

Adler said the lack of unified public health messaging is endangering Texans, and expressed outrage over President Donald Trump’s statements this week that the virus could “just disappear.”

“And when they start hearing that kind of ambiguous message coming out of Washington, there are more and more people that won’t wear masks, that won’t social distance, that won’t do what it takes to keep a community safe,” the mayor told CNN. “And that’s wrong, and it’s dangerous.”

For most people, the coronavirus causes mild or moderate symptoms that clear up within weeks. But for others, especially older adults and people with existing health problems, the highly contagious virus can cause severe symptoms and be fatal. The vast majority of people recover.