The high-priority bill boosts per-student funding and reduces property taxes across the state. 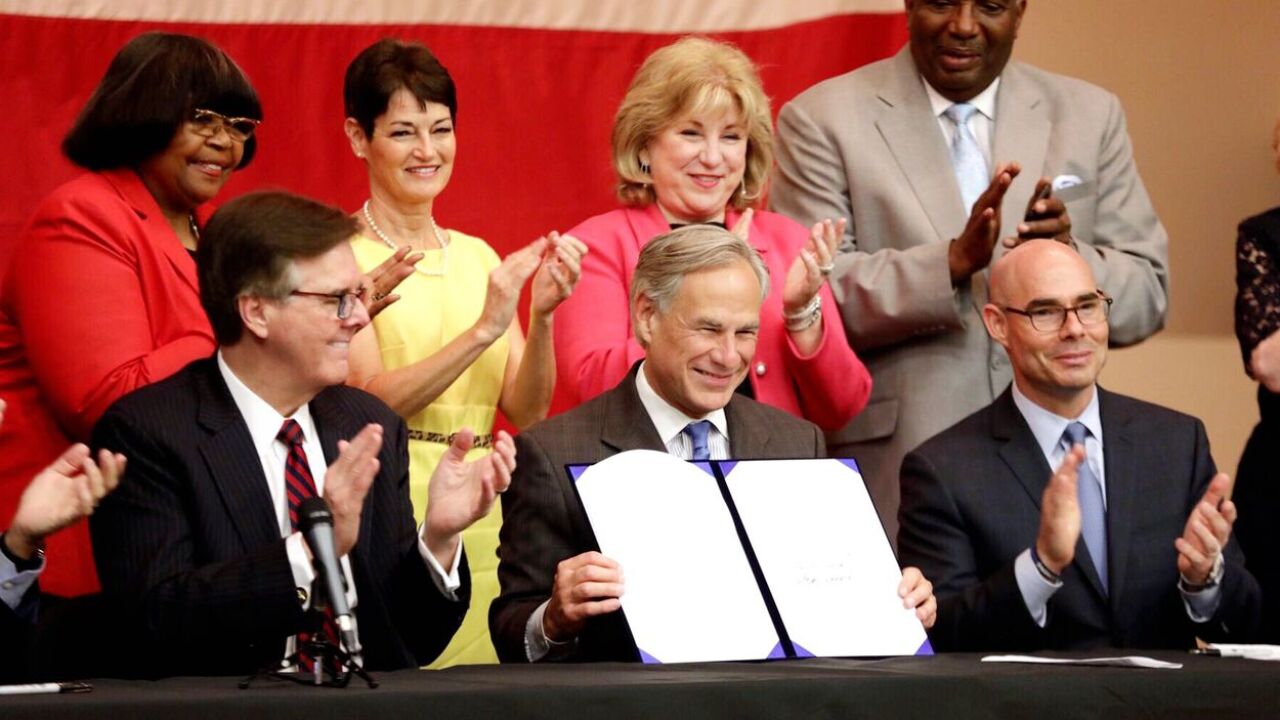 By Patrick Svitek, The Texas Tribune

Gov. Greg Abbott has signed into law one of lawmakers' biggest achievements this year, a massive overhaul of Texas' long-beleaguered school finance system.

Abbott put his signature on House Bill 3 during a triumphant ceremony Tuesday at Parmer Lane Elementary School in Austin. The governor was flanked by Lt. Gov. Dan Patrick, House Speaker Dennis Bonnen and several lawmakers involved in the effort.

"You could not overstate the magnitude of the law that I'm about to sign because this is a monumental moment in public education history in the state of Texas," Abbott said. "We did something that was considered to be highly improbable, and that is to be able to transform public education in the state of Texas without a court order forcing us to do so.

The bill's signing represented a capstone to state leaders' laser-like focus on reforming school finance and property taxes since the beginning of the 2019 legislative session session. Abbott is set to sign the priority property tax legislation, Senate Bill 2, during a ceremony Wednesday at a burger joint in Austin that says it is struggling to keep up with rising property taxes.

The spending will increase per-student base funding by about 20%. It includes money to give teachers raises, fund free full-day pre-K for eligible 4-year-olds and reduce the amount of money wealthy districts must spend to subsidize poor districts through the state’s recapture program known as “Robin Hood.”

It also, controversially, includes money for districts that want to start merit pay programs, giving bonuses of between $3,000 and $12,000 to their higher-rated teachers. And it provides money for high-needs and rural school districts that need help to incentivize teachers to work there.

At the bill-signing ceremony, state leaders hailed the unity that they say allowed them to finally get school finance reform across the finish line.

"I love showing Texans that when your governor, your lieutenant governor and your speaker say, 'We're going to be a team,' we do great things," said Bonnen, who just completed his first session behind the gavel.

Democrats countered that it was their gains in November, including 12 seats in the House and two in the Senate, that made House Bill 3 possible.

"If Democrats continue to win elections, bills like HB 3 will become the norm, not the exception," state party spokesman Abhi Rahman said in a statement.

This article originally appeared in The Texas Tribune at https://www.texastribune.org/2019/06/11/texas-gov-greg-abbott-signs-116-billion-school-finance-measure-law/.