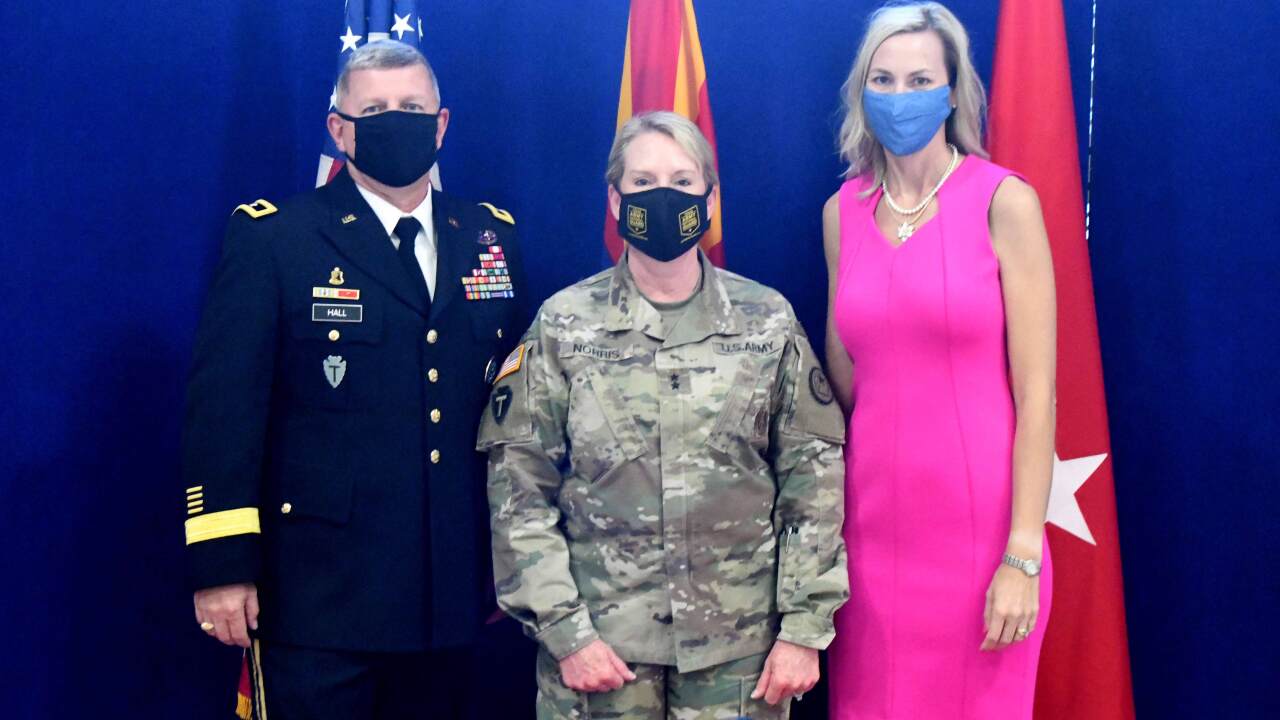 Hall is the son of BG(R) Hugh and Fran Hall of Gatesville, TX, and the son-in-law of Eddie and Clydie Flores of Henderson, TX.

Most recently, Hall led the Department of Defense COVID-19 response in New York and New Jersey. This deployment included responsibility for three alternate care facilities, DOD staff for 13 hospitals, support for more than 2,800 DOD personnel, and support to the New York City Office of the Chief Medical Examiner.

“Wendy and I have been blessed beyond imagination during our career in the Army and the Army National Guard. We will never be able to adequately thank our family, friends, fellow warriors, and mentors who helped pave the way and pushed us outside our comfort zone. I also want to thank Maj Gen McGuire and MG Tracy Norris for a phenomenal Arizona and Texas Retirement ceremony. God bless both these great DOD leaders.”

Hall began his military career when was commissioned into the Armor Corps upon graduating from New Mexico Military Institute in 1987. Hall led warriors at every echelon from platoon to 2-Star Command in Armor, Recruiting, and CBRN units. He has served on Title 10 and Title 32 with the Texas National Guard, the Arizona Army National Guard, the National Guard Bureau, United States European Command (USEUCOM), and U.S. Army North.

Hall has held a wide variety of staff and leadership roles. He has served as the Deputy Director of Partnering, Security Cooperation, and Weapons of Mass Destruction, USEUCOM in Stuttgart, DE; AZARNG Land Component Commander, Phoenix, AZ; Chief of Staff for the Texas Military Forces, Austin, TX; Chief of Staff of the 36th ID, Austin, TX; and Director of Manpower & Personnel for the TXNG, Austin, TX.

MG(R) Hall and his wife Wendy, along with their children, plan to retire in their home state of Texas.