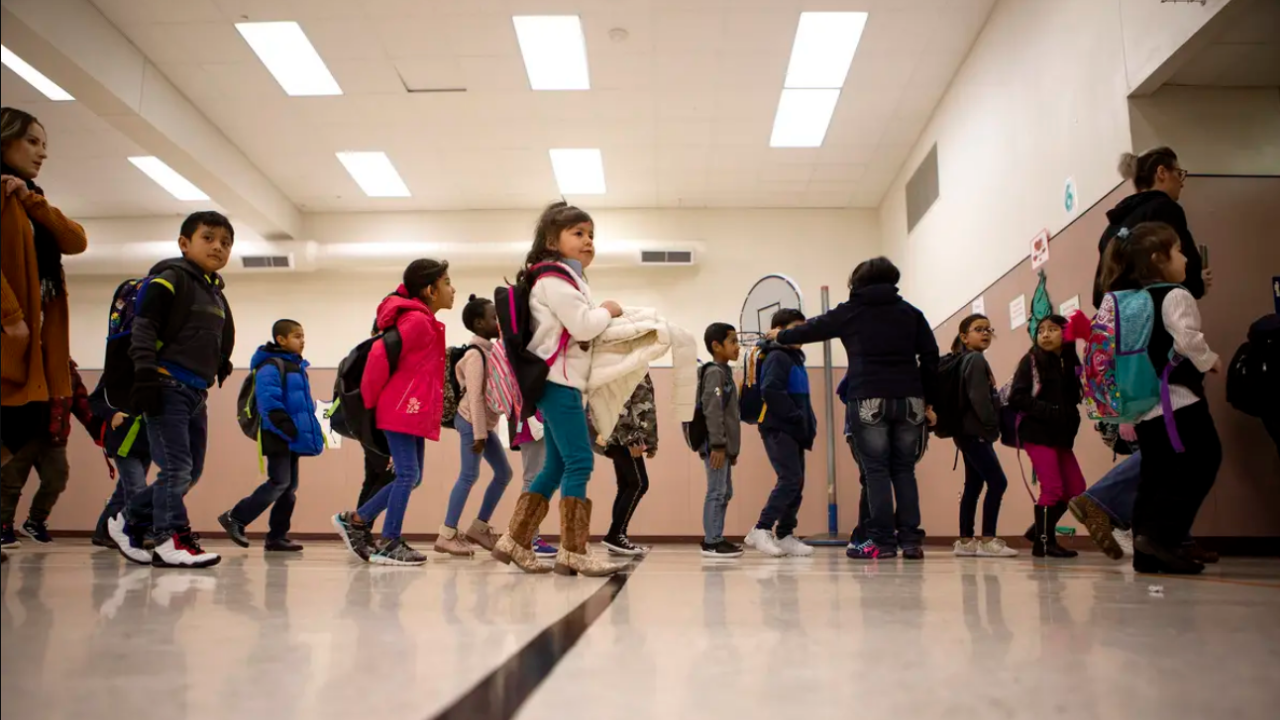 By Aliyya Swaby, The Texas Tribune

"Alarming failure rates among Texas students fuel calls to get them back into classrooms" was first published by The Texas Tribune, a nonprofit, nonpartisan media organization that informs Texans — and engages with them — about public policy, politics, government and statewide issues.

Need to stay updated on coronavirus news in Texas? Our evening roundup will help you stay on top of the day's latest updates. Sign up here.

As fall progresses, Texas public school superintendents are realizing that virtual instruction simply is not working for thousands of students across the state.

Report cards from the first weeks of the school year show more students than last year failing at least one class. Students are turning in assignments late, if at all; skipping days to weeks of virtual school; and falling behind on reading, educators and parents report. Many parents say they’re exhausted from playing the role of at-home teacher, and some students without support at home are struggling to keep track of their daily workload with limited outside help.

The problems are concentrated among students trying to learn from home, more than 3 million of the state’s 5.5 million public school students, according to administrators’ accounts. The trends are adding urgency to calls for getting more students back into classrooms as quickly as possible.

By now, many school districts hoped their students would be making up academic ground lost last spring, when the pandemic caused them to shut down classrooms. Texas is mandating that districts get back to normal this fall and prepare students for upcoming state standardized tests. Schools dialed up the intensity of their classes — and then an alarming number of students began failing.

As the first grading period came to a close, some administrators began temporarily backpedaling from their initial insistence on academic rigor. They gave teachers the message: Do what you can to make sure kids pass.

Judson Independent School District, in San Antonio, added a note to its grading handbook allowing principals to “grant any exceptions” and “extend grace” to students, letting them make up late work or drop assignments. “We understand that connectivity issues, lack of devices, technological issues with the Student Portal, Canvas, and electronic books may impede a student from submitting their assignments in a timely manner,” the handbook now reads.

Cathryn Mitchell, principal of Austin ISD’s Gorzycki Middle School, sent an email in early October, obtained by The Texas Tribune, alerting all staff to a “campus-wide dilemma.” Almost 25% of students were failing at least one class, including 200 failing more than one subject. She attributed the failures to steep technology learning curves, lack of access to devices and Wi-Fi, shifting reopening guidelines and anxiety over the health risks of on-campus learning.

The email implored teachers to exhaust “all measures to assist the student before failing them,” including working with them one on one, emailing or calling parents, and setting up Zoom parent conferences. For teachers unable to do everything to help a failing student before the grading deadline, Mitchell wrote, “we would ask that you gift the student with a 70.” Texas’ “no pass, no play” rule prohibits students pulling less than a 70 in one or more classes in a marking period from playing sports or participating in extracurricular activities for three weeks.

“We know that some students are taking advantage of the situation or have procrastinated to get themselves into this position. There is no question about that,” Mitchell wrote. “But we also know that we have asked a great deal of them these first five weeks. ... This will not be the norm every six-weeks."

Austin ISD officials told the Tribune that school leaders are “committed to high standards of academic rigor” and working to “better serve” students with low averages or incomplete grades based on their individual needs. They did not respond to questions about whether Mitchell’s approach was supported by the district or whether 25% is an average failure number across the district this marking period. According to KVUE-TV, about 11,700 Austin ISD students are failing at least one class this year, a 70% increase from last year.

As the extent of students’ struggles become clear, parents and superintendents are increasingly determined to get students back to school, the pendulum of their worries swinging away from health risks and toward the risks of students not learning at all. “Districts are starting to feel some real internal pressure as educators,” said Joy Baskin, legal services director at the Texas Association of School Boards. “If they feel that there’s enough momentum around getting everyone back, I think that’s their preference.”

State data on COVID-19 in schools is limited and full of gaps, but it points toward low student infection rates, encouraging some experts. Experts say layering policies such as sanitization, social distancing and masks is needed to reduce the risk of transmission. Despite outcries from some teachers and parents, dozens of school districts have nixed their virtual learning options altogether and brought nearly all students back to classrooms.

According to the San Antonio Express-News, at least one of those districts is attempting to require all remote learners with failing grades to return in person — violating recently updated state guidance. “Discontinuing remote instruction in a way that only targets struggling students is not permitted,” the updated guidance reads.

Texas school districts don’t have much time to get students back on track. This academic year, the Texas Education Agency will resume strict sanctions on schools and districts with consistently low student standardized test scores after pausing those penalties last spring. And there are dollars at stake, with state funding tied to student attendance. Districts have reported losing track of thousands of students, including some of their most vulnerable, who haven’t logged into virtual classes or responded to phone calls and door knocks. According to state leaders, schools that are open for in-person instruction have seen higher levels of enrollment than those with only virtual education.

San Antonio’s Northside ISD has not changed its expectations for virtual students, despite seeing higher failure rates, said Superintendent Brian Woods. Since many students learning from home are low income, Black and Hispanic, lowering academic standards for those students could end up deepening existing inequities, he said.

Instead, the district has put together a call team to reach out to low-performing virtual learners and urge them to come back to campus. Just under 45% of students are learning from classrooms in the second grading period, up from less than 25% earlier in the fall, when the district slowly phased students in. “We’re not going to fix it by only taking the good grades or dropping half the grades,” Woods said. “We’ve got to dig in and look more at the root cause. We know what it is: There’s kids who need to be in the building, period.”

In Brazosport ISD, where 78% of students are learning in classrooms, a quarter of virtual learners are failing two or more classes, compared with 8% of at-school students. The district is “not dropping our expectations for at-home students,” said Superintendent Danny Massey. But with coronavirus cases dropping in Brazoria County and district officials being transparent about COVID-19 cases on campuses, more parents are gradually choosing to send their students back.

Some Austin ISD parents are considering sending their children back later this fall, once the district returns to in-person instruction that more closely resembles a regular classroom. When the district reopened, it had students sitting in classrooms but learning virtually. The state halted that approach. Rosemary Wynn, an Austin ISD parent, thinks her eighth and ninth grade sons may get more out of learning in person once it includes more face-to-face instruction.

She and her husband had a stern talk with their O. Henry Middle School eighth grader earlier this fall after realizing he had not opened about 100 emails from his teachers, except one from his football coach. He was previously a straight-A student, but at one point his grade in one class had fallen to 29, she said.

“Children don’t know how to read email. That is not part of their repertoire,” she said, with exasperation. “I haven’t had a single teacher reach out to say, ‘your kids’ grades this, your kids’ grades that.’ I think the whole way this is set up is a recipe for disaster.”

Kelly Sanders and her son Bizuayehu Crouther, a 14-year-old at Austin High School in Austin ISD, regularly debate whether he should return later this fall. Bizuayehu has dyslexia and dysgraphia, which impacts his ability to write clearly by hand, and he’s found virtual learning much easier. “I do not want to go back,” he said.

Sanders is concerned that the second grading period will be even more academically rigorous and that her son will not be able to keep up virtually. “I’m happy that [he is] making really good grades right now, but I’m concerned that it still isn’t as rigorous as the classes would be if it were in person. If at some point he has to take a standardized test on the material, I don’t know what that looks like,” she said.

But for other parents, the decision is easy. Single parent Renee Schalk chose to keep her 17-year-old son and 2-year-old triplets home from Georgetown schools and doesn’t regret it. “My children are children of color,” said Schalk, who is Black. “I don’t want them subjected to COVID-19. … We’re not doing enough in this state, we’re not doing anything in this country to make it safe.”

Angelina Allegrini, a 14-year-old ninth grader in San Antonio’s North East ISD, said her grades suffered in the beginning of the year as she got accustomed to the variety of programs teachers used for online learning and the exhaustion of staring at a screen for three to four hours a day. After a few weeks, and a little leniency from teachers, she pulled them back up.

But the social, extroverted teenager still felt she was missing something. “I wanted to try to get to know people in my class. I saw some of them on the screen, but that’s not the same,” she said.

On Monday, after several weeks of learning from home, Angelina walked into her high school for the first time this year. Her mother, Cherise Rohr Allegrini, a prominent epidemiologist in San Antonio, said she was “not thrilled” about her daughter’s decision but predicted it wouldn’t last long, with a surge in COVID-19 cases likely on the horizon. “I think they’re probably going to change and close schools in a couple of weeks or so,” she said. “We’re going to start seeing outbreaks on campuses.”

Disclosure: The Texas Association of School Boards has been a financial supporter of The Texas Tribune, a nonprofit, nonpartisan news organization that is funded in part by donations from members, foundations and corporate sponsors. Financial supporters play no role in the Tribune's journalism. Find a complete list of them here.

This article originally appeared in The Texas Tribune at https://www.texastribune.org/2020/10/23/texas-students-remote-learning-failing-schools/.

The Texas Tribune is proud to celebrate 10 years of exceptional journalism for an exceptional state.

Explore the next 10 years with us.