Affidavit: Guillen's body dismembered, burned after she was bludgeoned to death 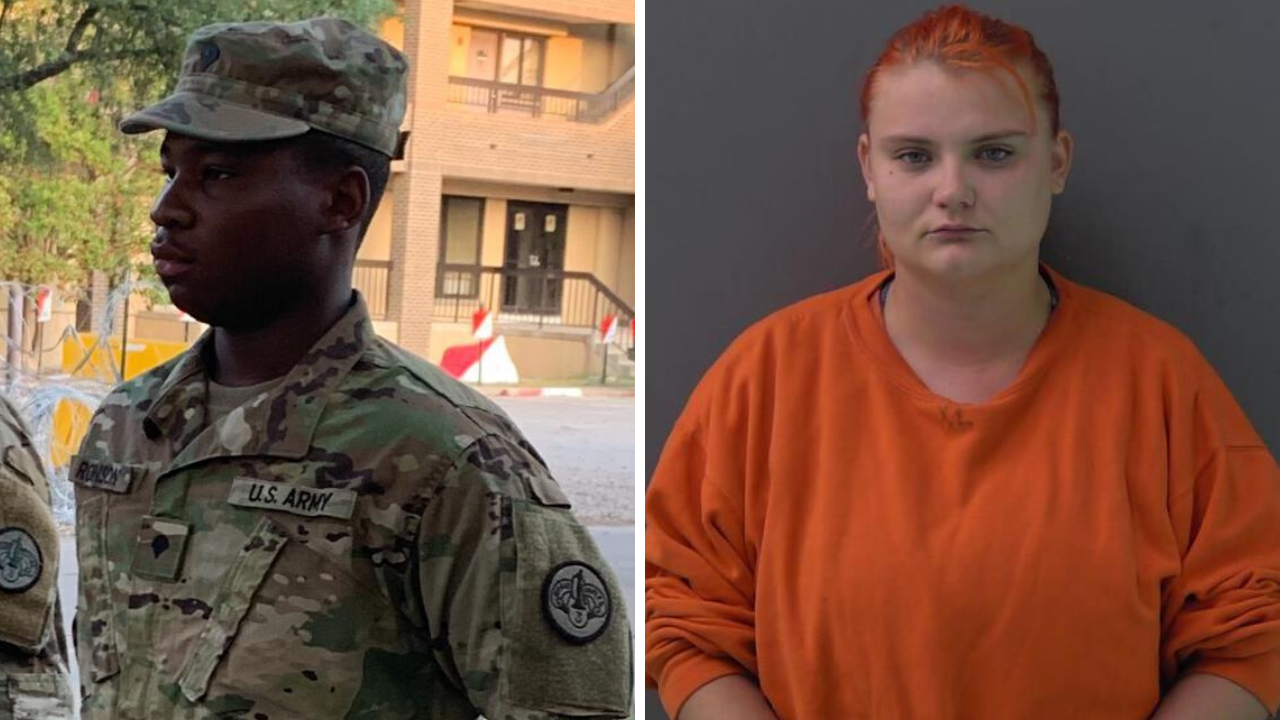 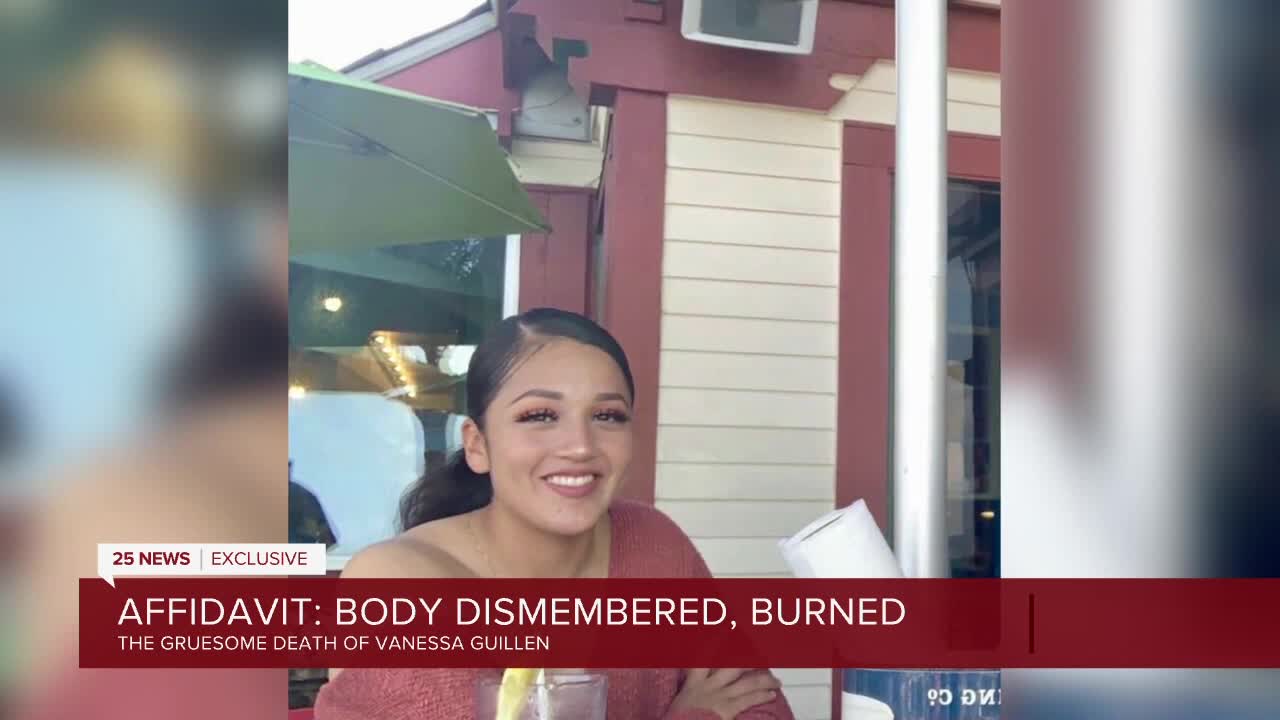 FORT HOOD — Two suspects dismembered Pfc. Vanessa Guillen's body and attempted to burn it after she was bludgeoned to death, an affidavit reveals.

The two suspects have been identified as Spc. Aaron Robinson and 22-year-old Cecily Anne Aguilar of Killeen, a civilian. Aguilar is also the estranged wife of a former Fort Hood soldier.

Guillen was last seen on April 22. The Army CID was notified on April 23 that she was missing.

Authorities determined through phone records that Guillen's last outgoing text message was to Robinson. He was one of the last people to see Guillen.

On April 22, Robinson said he texted Guillen to inform her he was in the arms room. He said she read serial numbers for equipment and afterword gave her paperwork and the serial number for a .50 caliber machine gun that needed to be serviced.

Spc. Robinson said Guillen left the arms room and he believed she would have gone to the motor pool. Witnesses at the motor pool prepared to receive paperwork from Guillen stated she did not arrive with the paperwork.

On April 28, the CID interviewed Robinson. He told authorities that after he finished his work on April 22, he went to his off-post residence he shared with Aguilar and did not leave for the rest of the nigh except around 6:30 p.m. when he had to come on post to sign on to a government computer and enroll in training.

On May 18, two witnesses were interviewed. The two said that on April 22, they saw Robinson pulling a large "tough box" with wheels that appeared to be heavy out of the arms room where Robinson worked. The two saw him put the box in his vehicle and drive away.

On May 19, Robinson consented to a search of his phone. A review showed Robinson called Aguilar multiple times during the night of April 22 and as late as 3:30 a.m. on April 23. He also received calls from Aguilar throughout the day.

Aguilar was interviewed on June 19. She told authorities she was with Robinson all night. When asked why Robinson would call her after midnight if they were in the same residence, she said she could not find her phone.

During a re-interview, Aguilar told authorities her previous statements were a lie. She said she did leave her residence because she likes to cope with long drives. She told authorities she and Robinson took a long drive the night of April 22 to a park in Belton to look at the stars. The two then allegedly went home after that.

Robinson's phone data was then analyzed. That data showed his cellphone was in the vicinity of FM 436 and West Main Street in Belton around 1:59 a.m. on April 23. Specifically, his cellphone was on or around a bridge. The phone was then tracked along the Leon River in a "northward" direction. His cellphone remained in that area for roughly two hours.

Aguilar's cellphone data revealed she and Robinson were together near the Lean River on April 23 and April 26.

That info led authorities to search the area. During the search, a burn site with disturbed earth was identified. What appeared to be burned remains of a plastic tote or tough box were found in the area where Robinson's phone was pinged.

According to the affidavit, the soil beneath the burn site was remarkably softer and "moister" than the soil found at similar depths merely feet away and had an odor of decomposition. However, no remains were located.

Around 1 p.m. on June 30, the CID was notified that contractors working on a fence adjacent to the Leon River in Belton discovered what appeared to be human remains. Authorities searched the area and found scattered human remains that appeared to have been placed into a concrete-like substance and burned.

Authorities then interviewed Aguilar around 8:30 p.m. on June 30. During that interview, she told authorities Robinson told her that he had hit a female soldier in the head with a hammer multiple times in the arms room, killing her on Fort Hood. Robinson then put her in a box and moved the box to a location near the Leon River.

On the evening of April 22, Robinson picked up Aguilar at a gas station she worked at and took her to a site near the Leon River and near a bridge. A box with wheels and handles was already at the site. Aguilar told authorities Robinson walked her over to the woods and opened the box, which had a dead female inside.

Aguilar, on a later date, identified the body as Vanessa Guillen.

To more easily dispose of and conceal the body, Robinson and Aguilar dismembered the female's body. They used a hatchet or ax and a machete type knife and removed the limbs and head from the body.

The two attempted to burn the body, however it would not burn completely. They placed her body in three separate holes and covered up the remains.

Aguilar and Robinson returned to the site on April 26. Prior to their return, the couple obtained hairnets and gloves. Aguilar purchased a bag of what she referred to as concrete from someone through Facebook messenger.

The couple then uncovered Guillen's remains, removed them and continued the process of breaking down her remains. Her remains were then burned again, along with the couple's gloves and hairnets. Robinson and Aguilar then placed the remains back in the holes with the concrete purchased earlier.

Robinson and Aguilar later burned their clothes at their home.

The two concocted the story about taking the long drive to the park as an alibi.

Prior to June 30, Robinson was confined to his barracks room on Fort Hood. He absconded from the post on the night of June 30.

According to the affidavit, Aguilar assisted authorities with locating Robinson while he was on foot in Killeen. He was located walking in the 4700 block of East Rancier Avenue. As he was approached by law enforcement, he brandished a pistol and shot himself in the head, killing himself.

He was pronounced deceased at 1:17 a.m. by Justice of the Peace Garland Potvin at the scene.

Aguilar was arrested on July 1 for tampering/ fabricating physical evidence with intent to impair a human corpse- a second degree felony. The charges are federal charges. The U.S. Marshal's are set to take custody of her.

Upon conviction, Aguilar faces up to 20 years in federal prison and a maximum $250,000 fine.