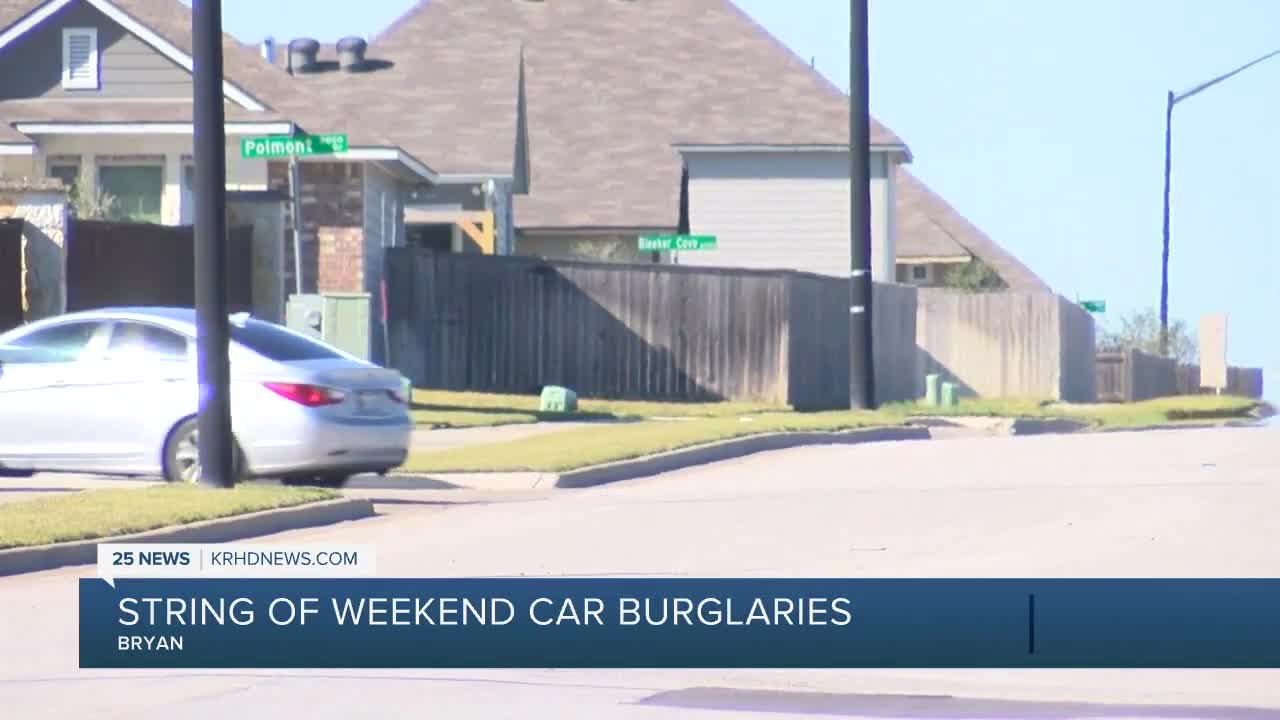 BRYAN, TEXAS — The Bryan Police Department is investigating a string of burglaries that happened over the weekend.

Over the weekend, Bryan PD had a number of calls come in and now they are investigating 12 reports of vehicle burglaries that were scattered across Bryan.

Sgt. Bona with Bryan PD says during this time of year, some people tend to get distracted, with their mind on family, the holidays or even getting back from the grocery store and they may forget a very important task: locking their vehicle behind them.

"We always encourage everyone to remove the valuables whenever possible. If that's not possible, you've got to keep them out of sight where it's not attracted to someone looking to steal things. Always lock your car," Sgt. Bona said.

Reports from over the weekend were across the entire Bryan area, but a few of the crimes were reported in the Edgewater community, which leave some neighbors on edge.

"It's unnerving. It definitely makes us think twice what you leave in your car and how you leave your car. Fortunately, we keep our doors locked, but not so many do," Taryn Adkins, an Edgewater resident said.

Neighbors describe the Edgewater area as a nice and family-oriented community and say the incident from Saturday was described as a group of people combing the streets checking door handles.

"I would say between beefing up the security of our own home and the neighborhood and the ability for the neighborhood to get in touch with one another quickly helped as well," Adkins added.

Adkins is thankful for the neighborhood she lives in and the camaraderie the community provides and says neighbors looking out for one another is something special.

"We definitely feel very blessed that we are in a community where the neighbors take it very seriously to protect one another. It's a new community, but everyone is committed to helping each other out," Adkins said.

Sgt. Bona also stresses the value in looking out for one another and how it can help prevent crime.

"It's good that we take care of each other and that we look out for our neighbors. Vehicle burglaries can happen very quickly and it can look like a total innocent person walking up to their own vehicle and it's not," Sgt. Bona added.

Sgt. Bona says a range of items were taken from vehicles over the weekend across the Bryan area, including clothing electronics and firearms.

According to BPD, by this date last year, the department had 448 reported vehicle burglaries. This year (2020) there has been a 12% reduction with 396 reports.