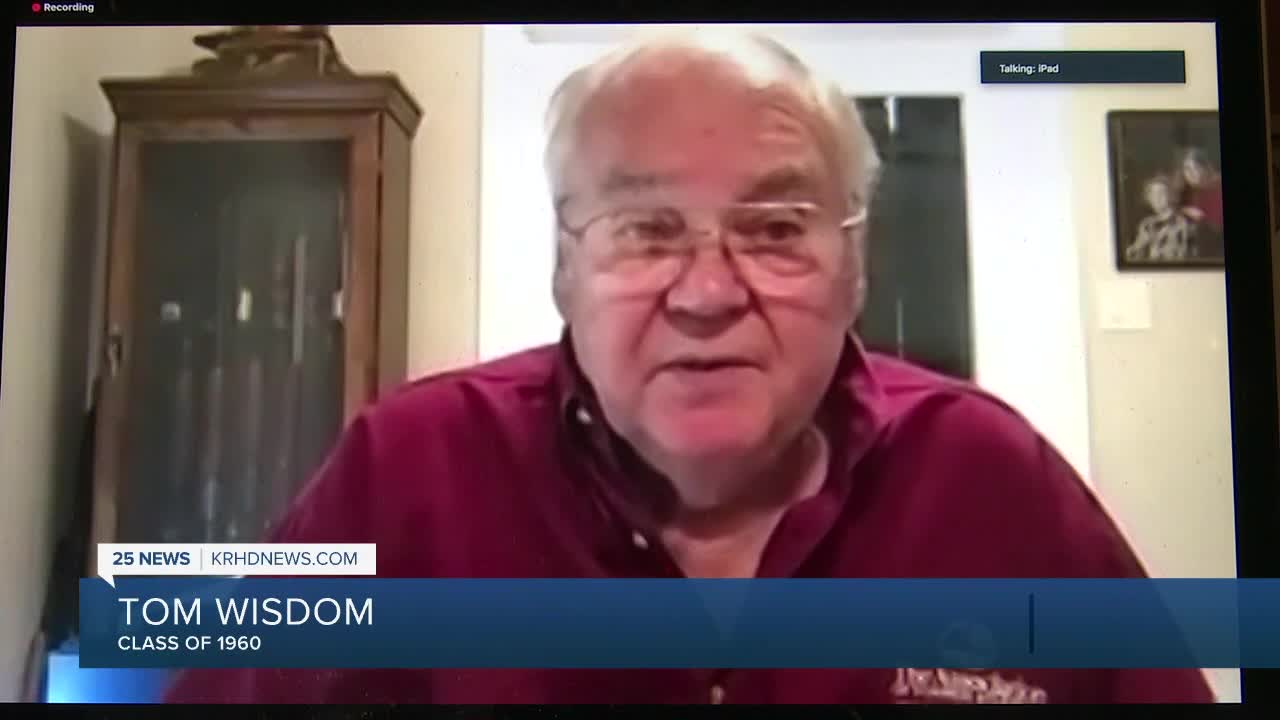 Thanks to a generous donation from the Class of 1960, three student veterans at the Texas A&M University Galveston Campus received Aggie scholarship rings at the first Galveston ring presentation ceremony this fall.

Since 2013, the Don & Ellie Knauss Veteran Resource & Support Center (VRSC) at Texas A&M has helped to cover the cost of Aggie rings for student veterans.

A partnership between the VRSC and The Association of Former Students sparked the Aggie Rings for Veterans Program.

With donations from former students and other benefactors, 370 rings have been awarded to student veterans.

The former students from the Class of 1960, Tom Wisdom, Dick Ghiselin and Bernard Natho, met the three ring recipients during a private ceremony on Sept. 24.

"When we started all this, we hoped to donate between six and eight rings," said Wisdom, who is an Army veteran. "With the ring ceremony coming up in November this year, we will have donated 82 rings, and I believe we have another four or five more on top of that. It's important to us that we defray the cost of Aggie rings for as many student veterans as possible."

John Vandewater, who will graduate from the Galveston campus this fall, is a 20-year U.S. Army veteran.

He said earning his Aggie ring was a longtime dream and a moment he and his family will always cherish.

As a husband and father of four, learning that the cost of his ring was covered by other Aggies was a welcomed and appreciated surprise, he said.

"I couldn't believe it. At first I was just incredibly grateful for the ring scholarship," Vandewater said. "I worked hard to earn my Aggie ring but to have someone else pay for it made it just that much more meaningful. When I started talking with Mr. Wisdom, I learned that we both served in the Army and were both armored tank cavalrymen."

For Robert Jackson, a U.S. Navy veteran studying ocean engineering in Galveston, an Aggie ring is a symbol of the challenges he overcame.

"Pursuing this degree has been a test of endurance, one that far surpasses that of my military experience," Jackson said. "It's an accomplishment that will forever remind me of my strength, resolve and values. This ring symbolizes the core values of every service member and Aggie, especially the Aggie engineers."

After serving five years in the U.S. Coast Guard, Levi Wright is working to complete a marine transportation degree in Galveston and to support his family.

He said the Veterans Administration benefits that others utilize to attend college offer some financial assistance, but typically are not enough to support a family. As a husband and father, Wright said the benevolence of donor Natho meant he didn't have to make a choice between his own dream and his family.

"I fully intend to pay this forward," Wright said. "If it was not for the selfless service of Mr. Natho, I would not have been able to get my hunk of Aggie gold. The loyalty and respect I have for Texas A&M, for its former students, and for the dedication to ensure I could participate in this cherished tradition…I will forever be grateful."

Col. Gerald Smith '82, VRSC director, is working with his staff, former students and The Association of Former Students to ensure that the program continues to grow.

"Earning an Aggie ring is a significant achievement," Smith said. "No student who has served our country and defended our freedom should be faced with additional financial challenges as they become eligible to order their class ring. Identifying generous people who are willing to fund an Aggie ring scholarship is one of the simplest ways we can show our appreciation for their selfless service."