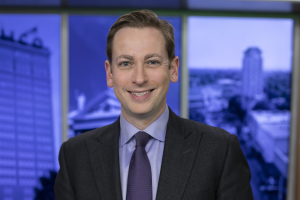 As an Emmy award winning journalist, Todd has covered some of the state's biggest stories including Hurricane Harvey, the West fertilizer plant explosion, and chasing the infamous 'Affluenza' teen Ethan Couch to Mexico.

Todd spent the fall of 2019 working as a host & journalist for a documentary investigating the EU & Romanian justice systems. Prior to that, he was a reporter and fill-in anchor for WFAA in Dallas/Fort Worth. His work has been regularly recognized by the Texas AP Broadcasters Association, and he took home a 2018 Lone Star Emmy for coverage of Hurricane Harvey. He has also been nominated for several other Lone Star Emmys.

Todd previously worked at KOAT, the ABC affiliate in Albuquerque, where he broke a number of high-profile investigations, including a series of shady land deals where taxpayers lost millions of dollars. He received a Rocky Mountain Emmy for a story on a major gun robbery at a historic New Mexico ranch.

Earlier in his career, Todd anchored and reported in Nebraska after graduating from the University of Denver.

He's a regular volunteer with Meals on Wheels, and a past mentor with Big Brothers/Big Sisters and the Omaha Public Schools TeamMates program.

He's always looking for story tips and suggestions on where to grab a good burger & brew in Central Texas! Email him at todd.unger@kxxv.com.