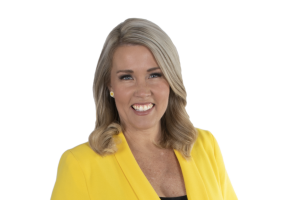 Lindsay Liepman is a Central Texas native, growing up in Mexia and graduating in 1999. She earned a journalism degree at Texas A&M University in 2003 and began her career as a news reporter at KBTX-TV in Bryan/College Station.

She moved to New England and launched the first CBS affiliate in Western Massachusetts as the Main Anchor at WSHM-TV.

The sun and sand of Southwest Florida came calling. Lindsay was promoted to Morning and Noon anchor at WINK-TV in Ft. Myers, Florida and there she anchored historic coverage of the final NASA shuttle launch and earned both an Emmy award and an Edward R. Murrow award for her story "Witness Test". It exposed the inconsistencies in witness statements.

Lindsay traded hurricane coverage for blizzards at her next stop in Portland, Maine as the Weekend Anchor at WMTW-TV. There she covered Former President George H.W. Bush's skydive above Kennebunkport, ME on his 90th Birthday - exactly ten years after the celebratory skydive he took above the skies of College Station when Lindsay was just a cub reporter.

As Lindsay's family grew, so did the desire to move back home.

Before returning to her hometown market, Lindsay was the Breaking News Anchor at CBS Austin News and earned a Lone Star Emmy nomination in Crime News for her story, "Seeking Justice: Austin's Sex-Trafficking Triangle", which detailed the sex-trafficking triangle between Dallas, Houston and Austin.

She spent three years at CBS Austin and launched the "Forever Families" segment, which highlights foster children in Central Texas who need a forever family.

Life as a news reporter in Austin, Texas really was weird and wonderful. From party unicorns to Willie Nelson's guitar, Lindsay focused on stories that made Austin...well, Austin. She earned three more Lone Star Emmy nominations including for her anchoring.

In March of 2018, the city of Austin was paralyzed in terror. A serial bomber left package bombs across the city and targeted random victims. Lindsay anchored hours of unscripted, live coverage as Austin Police closed in on the suspect. On March 21, Lindsay broke the news to CBS Austin viewers that the Austin bomber was dead after detonating the final bomb on himself.

As Hurricane Harvey slammed the Texas Coast, Lindsay was on the anchor desk with a live interview and the compelling first images of destruction after a black-hole of communication lifted.

In 2018, Lindsay came to 25 News as the evening anchor. She made history as part of the first all-female evening anchor team in the city and ushered in a new era as the news leader in Central Texas. She earned an Edward R. Murrow for her work at 25 News and in 2020 premiered the documentary, "Blood, Sweat & Beats: The Waco Hip Hop Story" to a sold-out crowd at the historic Waco Hippodrome. Lindsay is a champion for children and the arts community, specifically leading the effort to designate Waco as a "Music Friendly Community" by the Texas Music Office.

Lindsay loves the news but what she loves most is her family, prompting a move in 2020 to "Good Morning Texas." She has four small children she calls the "Fab 4". Micah, Sawyer, Luke and Gracie are all familiar with the camera lights since they were born, and you'll see them from time-to-time on 25 News. If you see Lindsay at a Texas Country music show, or just the local grocery store, say hi. She's from a small town, so she loves a great story!