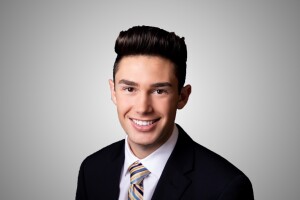 Jordan Evans joined the First Alert Weather team in May 2020. He comes to Central Texas from the hot and dry desert city of Phoenix, Arizona.

A very proud Sun Devil, Jordan graduated in May 2020 from Arizona State University where he earned a Bachelor of Science in Meteorology/Climatology from the School of Geographical Sciences and Urban Planning and a Bachelor of Arts in Journalism & Mass Communication from the Walter Cronkite School.

While attending college, Jordan was a weather anchor and reporter for Cronkite News on Arizona PBS. He interned at KMBC-TV in Kansas City, ABC15 Arizona KNXV in Phoenix, and CNN Weather at the world headquarters in Atlanta. He also served on the Board of Broadcast Meteorology in the American Meteorology Society as a student member.

In addition to being a meteorologist, Jordan is also a journalist and reported on climate and sustainability issues while reporting for Cronkite News. He covered former Secretary of Interior Ryan Zinke's visit to Grand Canyon National Park, reduction in water to several states along the Colorado River, and has featured scientists and their research at the University of Arizona and University of California San Diego. Jordan is also a certified drone pilot under the FAA's Part 107.

Jordan's love for the weather began when he was five year old, when a tornado outbreak struck Kansas City, MO in May 2003. To this day, he remembers watching Chief Meteorologist Bryan Busby on KMBC-TV for hours, cover the tornadoes. Over the years, Jordan connected and shadowed with numerous meteorologists, and is happy to begin his life long dream at KXXV.

Kansas City born and raised, Jordan is always looking for some great BBQ. When he is not on the air, he is either out exploring the area and taking photos, staying in touch with friends and family, or exercising.