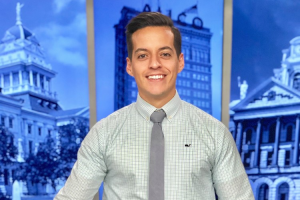 Joel was born in Peru and at a young age moved with his family to South Florida. He’s fluent in both English and Spanish and can speak an tiny bit of French. In high school he was in the marching band’s drumline and competed in a sport called WGI.

Joel went on to study in the College of Journalism at the University of Florida and became a first generation college grad. Go Gators!
Before joining KXXV, Joel worked in his hometown at WPTV NewsChannel 5 in West Palm Beach, Florida.

Joel is the proud dog dad of a French Bulldog named Brûlée who has her very own Instagram page. Joel loves the beach, but gets seasick on boats. Loves Chipotle and pineapple on his pizza. Hates pickles and all things seafood.

Joel’s career brought him to Texas, which is the first state other than Florida he has lived in. So if you see Joel around town, give him some tips on Texas living and point him towards good places to grab a drink and some food!