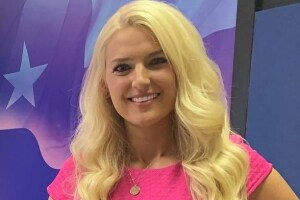 Hannah King joins KXXV/KRHD from West Tennessee where she worked in both departments, news and sports. Hannah was a reporter for the news department and she anchored her own weekend sportscasts for the local ABC/CBS affiliate in Jackson, Tennessee. Hannah is thrilled to be in The Lone Star State and will tell stories in the Bryan/College Station area, specifically Texas A & M University. Hannah is delighted to be in the Brazos Valley and is honored to share unique and impactful stories showcasing local communities.

Hannah began her television career at ABC11/WTVD Eyewitness News, a powerhouse news leader in the Raleigh/Durham/Fayetteville North Carolina market, as a Production Assistant, before making her way to West Tennessee for her first full-time on-air gig. Hannah was also a pioneer within the athletics department at her alma mater, Campbell University, being named the first student to report LIVE from the sidelines during sporting events in Buies Creek. Outside of the local TV world, Hannah has also worked for various professional sports organizations including the Seattle Mariners, the Carolina Panthers and the Greensboro Swarm.

Hannah was born and raised in Morganton, North Carolina and is a graduate of Campbell University (Go Camels), where she studied sports management and sports communication. She will reside in College Station with her English Bulldog, Gracie. If you see her out and about in the community, feel free to say hello!