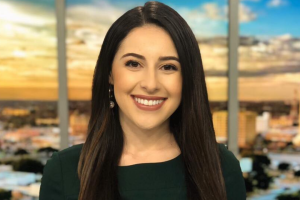 Elisa Navarro hails from The Golden State- California. She was born in Santa Cruz County near the coast and raised in the heat of the Central Valley. She's fluent in both English and Spanish and always dreamed of being a journalist.

Elisa graduated from Fresno State University in 2018 with a Bachelors Degree in Media Communications and a double emphasis in Multimedia and Broadcast. She also received a minor in Spanish.

Elisa began her career in Bakersfield, California, where she was a reporter for one year. She was an integral part of the morning show, constantly covering breaking news and current events, including the World Ag Expo which brings thousands of agriculture professionals to the Central Valley each year.

In 2019 she made the journey from California to Texas to join the 25 News family as a multimedia journalist. She has been a part of every show. So far in her time at 25 News, she has reported breaking details in the case of missing Spc. Vanessa Guillen, kept viewers safe and up-to-date during severe weather as well as traveled to Dallas to cover the jury decision in the case of Amber Guyger.

In September 2020, Elisa was promoted to the Good Morning Texas Weekend Anchor and Producer. Her favorite part is helping Central Texans wake up and stay informed on the weekends with local, engaging content.

When she is not working, Elisa is adventuring in the community. She loves practicing yoga, eating at local restaurants and spending time at Cameron Park. She also loves to chat, so say hi if you see her!